Between the World Wars, a “little world war,” as Time Magazine described it, took place from 1936-1939. The Spanish Civil War pitted the Republicans, backed by international leftist allies, against the Nationalists and soon-to-be-tyrant General Francisco Franco. You might know a little bit about the history of the Spanish Civil War and its significance in Europe. Both Fascist Italy and Nazi Germany supported the dictator, turning the relatively localized war into a prescient event for the megalomania and political atrocities that have come to define World War II. As the Associated Press described it, the “conflict became a battlefield of ideologies . . . fascism against elected socialists and communists.”

How much do you know about the novelists and poets who not only depicted battles through language, but also fought alongside the Republicans in various regions of the country? From Pablo Neruda to Ernest Hemingway to George Orwell, let’s take a relatively quick guided tour through the literary history of the brutal war in Spain. 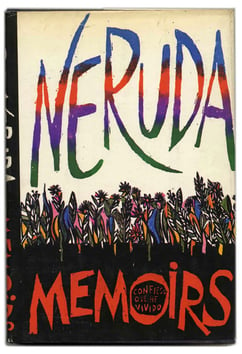 Before war broke out in Spain, the Chilean poet Pablo Neruda had diplomatic posts in Barcelona and Madrid. In the capital city, he befriended the playwright and poet Federico García Lorca, who ultimately became a victim of Franco’s regime. Neruda was living in Madrid when the battles began, and the poet’s experiences in opposition to Franco and the Nationalists solidified his ardent position as a communist writer. But it wasn’t simply his detached observations of the war that resulted in some of the most politicized poetry he ever penned. Rather, García Lorca’s execution had a profound impact on Neruda, and it played a significant role in the poet’s work in España en el Corazón: Himno a las Glorias del Pueblo en la Guerra [“Spain in the Heart: Hymn to the Glories of the People at War”].

The first edition, for all intents and purposes, was published by Ediciones Ercilla in Santiago de Chile in 1937. If you can locate a copy, the book comes complete with collage images of the war’s brutality. But the rarest edition of all is a battlefield publication from 1938, of which only six are known to exist. As rumor has it, Republican soldiers recycled paper and used an old printing press to make tangible the poet’s words. In his Memoirs, Neruda describes the first printing of his homage to the Republican fight:

“The soldiers at the front learned to set type. But there was no paper. They found an old mill and decided to make it there. A strange mixture was concocted, between one falling bomb and the next, in the middle of the fighting. They threw everything they could get their hands on into the mill, from an enemy flag to a Moorish soldier’s bloodstained tunic. And in spite of the unusual materials used and the total inexperience of its manufacturers, the paper turned out to be very beautiful.”

If you’d like to see a copy in person, you can visit the Library of Congress in Washington, D.C., or a handful of special collections libraries in Spain.

Ernest Hemingway’s For Whom the Bell Tolls 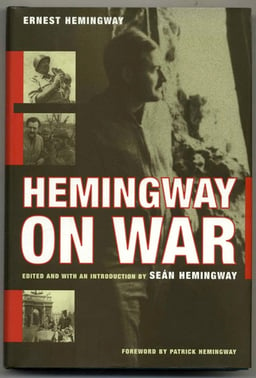 Most of us know that Ernest Hemingway fought in World War I and went on to write a number of his famous works while living an expatriate life in Paris. But did you know that he also reported on the Spanish Civil War for the North American Newspaper Alliance? Hemingway observed various moments of the war, including the Battle of the Ebro — the final key Republic offensive of the war. The American novelist and short-story writer took his own experiences and drafted, while back in North America, For Whom the Bell Tolls (1940).

Later adapted for the silver screen in a production of the same name starring Ingrid Bergman and Gary Cooper, For Whom the Bell Tolls depicts the experiences of Robert Jordan, an American soldier who travels to Spain to fight against Franco and his fascist forces.

Last but not least, George Orwell — the famed British novelist — wrote a nonfiction account of his experiences in the Spanish Civil War. In 1936, the author traveled to Spain as a journalist. Yet he quickly abandoned his role as a reporter to join the P.O.U.M. militia. In the text, Orwell describes his support of the Republican war effort, his experiences in Barcelona, and his escape from the country after the suppression of the P.O.U.M.

According to Lionel Trilling, who wrote the introduction to the 1952 edition of the text:

“This book is one of the important documents of our time...George Orwell’s book would make only a limited claim upon our attention if it were nothing more than a record of personal experiences in the Spanish war. But it is much more than this. It is a testimony to the nature of modern political life. It is also a demonstration on the part of its author of one of the right ways of confronting that life. Its importance is therefore of the present moments and for years to come.”

Indeed, Trilling’s words remain true of the book today, despite the fact that they were now written more than half a decade ago.

We’ve mentioned only three writers who relied on literary language to depict their own experiences and observations of the war in Spain. Many more writers are out there for you to discover, such as André Malraux, Ramón J. Sender, and Alvah Bessie. In your own literary pursuits, we hope you’ll continue seeking out writers of the Spanish Civil War and consider them in conversation with Neruda, Hemingway, and Orwell.