Joseph Conrad, one of the first modernist writers, was born Józef Teodor Konrad Korzeniowski in Poland on December 3, 1857. Though he didn't learn English until early adulthood, Conrad would become one of the top prose writers of the English language. Many of his stories were first published in magazines before they were published as novellas or books. Yet though he wrote steadily, he was not a financial success or widely read until the last decade of his life.

Conrad's father, writer and translator Apollo Korzeniowski, was of Polish nobility, but also a Russian political activist, and the family had to constantly relocate. Eventually they were exiled to the hinderlands of Russia and Ukraine. As a result, both of his parents acquired tuberculosis.  Conrad was home schooled by his father during those tumultuous years. He learned writing from reading Polish romantic poets Juliusz Słowacki and Adam Mickiewicz, and the plays of Shakespeare, which his father translated.

By the age of 11, Conrad was an orphan. His guardian was his mother's brother, Tadeusz Bobrowski,who had shunned a life of aristocracy and studied international law, though he quit to take care of his ailing mother.  Bobrowski pushed his nephews into his studies, and though Conrad was well read and fluent in French, he lacked discipline. Bobrowski wanted his nephew to learn a trade, but Conrad was adamant about becoming a sailor. His uncle gave in, and Conrad joined the French merchant marine before he was 18.  The French employed him for four years before they discovered he was still beholden to Russian subjugation. In debt and impoverished, Conrad attempted suicide. With his uncle's guidance and financial assistance, Conrad recovered and became a British merchant marine in Britain. 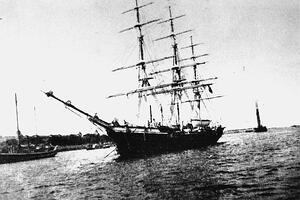 Conrad learned English and traveled to India and Maritime Southeast Asia, and South America, and more, and  kept notes from all of his voyages. He became a British citizen in 1886, but he always retained his thick accent and outsider perspective.  His first novel, Almayer's Folly, was published in 1895, about Captain Tom Lingard, who married at native in Borneo but got tangled up in business and greed and drugs. Lingard made recurring appearances in An Outcast of the Islands, published in 1896, and The Rescue, published in 1920.

The novella The Nigger of the 'Narcissus': A Tale of the Sea, published in 1897, is seen as the best books from Conrad's early years. (It was published in America as The Children of the Sea.) The protagonist is a black captain who grows ill and is saved by a few compassionate shipmates. Modern critics agree the book would be more widely read if not for the unfortunate title.  His next novella and likely his most famous work, Heart of Darkness, was first published serially in Blackwood's Magazine. It was a brutal tale of imperialism and colonization, based on his experience as a steamer captain on the Congo river for a Belgian company in 1890.

Heart of Darkness was later included as part of the trilogy, Youth: a Narrative and Two Other Stories (1902), and would be adapted numerous times throughout the twentieth century for radio, television and film, most notably as Francis Ford Coppola's 1979's film Apocalypse Now.  At the time, Heart of Darkness was not widely read or even reviewed, but it would go on to become one of the most studied novels at the university level in the post-colonial era, and made the Modern Library's top 100 books list. It became controversial in 1975 when esteemed African writer Chinua Achebe called  Conrad “a bloody racist” in his lecture An Image of Africa. It launched a debate that lasted for decades on whether or not Heart of Darkness (and Conrad himself) claimed superiority over Africans and “the other.”

Despite his father's political activism, and Conrad's own desire for an independent Poland, he distrusted democracy in light of the weakness of human nature. He wrote to friend Bertrand Russell in 1922 that he believed the only hope was a “change of hearts, but looking at the history of the last 2,000 years there is not much reason to expect [it].”  Though deeply emotional, Conrad showed restraint from sentimentality in his prose. In large part due to his uncle's influence, he believed that fidelity was the greatest human value, and was often frustrated and depressed about his lack of financial success.  The hopelessness he saw within the human condition could be found within his stories, and he thought that depth hindered a wider readership.Yet Conrad rejected the idea that he was a tragedian writer, although his stories are known for not have tidy, happy endings. He was not widely acclaimed until Chance, published in 1913.

Conrad died on August 3, 1924 at his house in Kent, England, and was buried at Canterbury. Though the popular Cricket Festival was taking place and the streets were filled with crowds, only a few close friends attended the modest funeral, an allegory for the loneliness of Conrad's years “living outside the established structures of family, social milieu, and country," wrote biographer Zdzislaw Najder.  Conrad wanted his writing to make people more than feel, he wanted it to make them see.