David Macaulay's Books For All Age

David Macaulay's books and illustrations are as thought-provoking as they are whimsical. He first had his idea for a French gargoyle story, which became Cathedral: The Story of its Construction, in the early seventies. While the lovely gargoyle ladies of medieval France did not make the cut, he was left with a drawing of a cathedral. This inspired a trip to Europe for research and resulted in the aforementioned Cathedral: The Story of its Construction's publication in the spring of 1973. Macaulay was given the Caldecott Honor Award for his efforts. He had been an interior designer and a high school teacher before, but after receiving such a prestigious award, he devoted himself to teaching illustration at his alma mater, the Rhode Island Institute of Design, and to writing and illustrating.

Several of Macaulay's books follow a similar paradigm: taking a topic, creating a fictional representation of that topic, and using that representation to educate readers about every possible aspect of the topic. It started with Cathedral, detailing the fictional town of Chutreaux's experience building a new cathedral after their church is destroyed by lightening. Castle follows suit, featuring his Aberwyvern Castle. While fictional, Aberwyvern is based on research into Welsh castles built in the 1280s. The book even describes how the town of Aberwyvern functions and supports the castle.

Mill features the imaginary New England town of Wicksbridge and their essential mill, while City describes the Roman town of Verbonia. Likewise, Mosque explains the details of a 16th century mosque in Istanbul and all of its surrounding buildings. These books take what Macaulay knows through training and research (he holds a bachelor of architecture from RIID) and makes them fascinating and accessible to younger readers, building a fictional framework with which to educate children on the realities of the amazing architectural works that make up our world.

Macaulay's best known books, however, are not about architecture at all. Instead, in The Way Things Work, he describes the way everyday machines function, using wooly mammoths to illustrate his points. With the original 1988 edition becoming a bit dated (though still classic), Macaulay once again turned his attention to the objects around us and in 1998 wrote The New Way Things Work, which includes technology such as email. He again went back to this theme in 2008 with The Way We Work which details the complex machine of the human body, explaining to children in a way that is both educational and entertaining, the ways in which the various systems of the body work together as a unit. 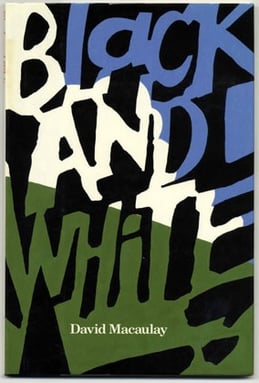 Black and White, arguably his most imaginative book, has nothing to do with explanations. In fact, it encourages readers to explore and come up with their own. Written in 1990, Black and White plays with negative space to tell four stories simultaneously, one panel per story on each page. A brother and sister are shocked when their parents come home wearing newspaper costumes. A boy takes his first trip alone. A burglar escapes and hides among cattle. A group of commuters are stuck waiting on a train. Each of the stories stands well enough on its own, but they combine to become even more delightful, having been informed by the other three. With each subsequent reading, it becomes clearer how the stories could possibly intersect.

David Macaulay has won numerous Caldecott Honor Awards. He holds three honorary doctorates. Many of his books have topped the New York Times Best Sellers list. It is safe to assume many more awards are to come. This celebrated writer and illustrator is as critically acclaimed as he is well-loved by both the children who grew up with his books and children just now discovering him today.