Famous Figures in the History of Book Binding

From the scroll to the codex to the modern volume, the form of the book has evolved considerably over the centuries. And alongside that, our methods for keeping the pages together have also changed considerably. Today we enjoy a thriving world of designer and art bindings, collectible in their own right. We can thank figures like William Caxton, Jean Grolier, and Samule Mearne for bringing innovation and beauty to the craft of bookbinding.

William Caxton is credited with both publishing the first English-language book and establishing the first printing press in England. Born around 1422 in Kent, Caxton went to London when he was sixteen years old. He was apprenticed to a prominent merchant. Caxton went on to Bruges, Flanders, where he became a prominent merchant in his own right. From 1462 to 1470, Caxton held the post of governor to the English Nation of Merchant Adventurers, representing his fellow merchants and acting as a diplomat for the king.

In the early 1470's, Caxton went to Cologne and studied the art of printing. He returned to Bruges in 1472 and set up a printing press with a Flemish calligrapher. Four years later, he returned to London and set up the first printing press in England at Westminster. Caxton translated Le Recueil des histoires de Troye from French to English and published his translation. Some say this was the first book published in English, but the British Library gives that honor to Caxton's edition of Chaucer's Canterbury Tales. Either way, Caxton is responsible for printing the first English-language book. He would publish more than 100 books during his lifetime.

At the time, the roles of printer, bookbinder, and bookseller had not yet become distinct professions, so Caxton acted as translator, editor, binder, and seller. He developed a reputation for exceptional craftsmanship and careful editing. Caxton shrewdly chose his titles to appeal to courtly readers who might offer him patronage. He also affiliated himself early in his career with Margaret, Duchess of Burgundy and sister to King Edward IV. Caxton would include lengthy prefaces to his books, acknowledging his patrons and subtly maintaining and enhancing political connections.

But Caxton wasn't content to count on patronage for his income. He also mentioned his prominent patrons to make his books more appealing to people of lower ranks who wished to emulate their social superiors. Meanwhile Caxton also accepted commissions from organizations from the Catholic Church.  A significant portion of Caxton's Latin titles were liturgical, and he wisely published them with commercial interests in mind. A small poster from 1466 or 1477 survives, advertising a book of liturgy as used in Salisbury. Though the book was printed in Latin, the poster is in English, indicating that Caxton expected to sell it not only directly to the church group that commissioned it, but also to the general public.

Jean Grolier de Servieres, vicomte d'Aguisy, built a famous library of exquisite volumes and introduced a new appreciation for the book as object. Before the "prince of bibliophiles" was the namesake for the Grolier Club, he served as Treasurer General of France and ambassador to the Court of Rome. Though Grolier was born in Lyons in 1489 or 1490, his family hailed from Verona. His father, a gentleman of the court of Louis XII, introduced him to the French court early. Grolier quickly distinguished himself with his learning and understanding of finance. By 1534, Grolier found himself in Rome, handling delicate negotiations with Pope Clement VII. The two would become fast friends. 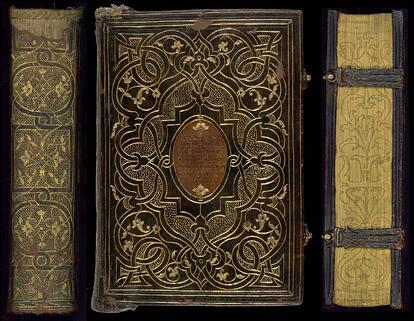 Long interested in books and literature, Grolier made friends with book printers wherever he went. Erasmus praised him warmly, while Coelius Rhodigimus, Aldus Mantius, and Baptiste Egnazio all dedicated books to him. But it was during his time in Rome that Grolier began to assemble his incredible library. He chose volumes not only for their literary merit, but also for their beautiful form. Grolier frequently owned multiple copies of the same book, each bound differently--and beautifully. Grolier commissioned bindings that bore fine paper frontispieces, elaborate ornamentation, and colorful painting. Sometimes Grolier would even have new margins added to leaves that had been left short during folding, because he wanted his copies to have extra wide margins.

It's clear that Grolier often lent his books out because many bear the inscription "Io Grolierii et amicerum" (Belonging to Grolier and his friends). That habit is significant; it introduced Grolier's peers to the concept of books as beautiful objects. In fact, Grolier's bindings were so lovely, they changed the way people put these books on the shelf. Traditionally books were shelved binding side in, and the title would be written on the foreedges to identify the volume. But Grolier's bindings were so gorgeous, they begged for display. Thus, people began shelving books with the binding facing out.

Experts disagree over whether Samuel Mearne actually bound books himself, but his bindery introduced the cottage style, a distinctly English binding style that has lasted longer than any other. Born in 1624, Mearne completed his second apprenticeship with bookbinder Jeremy Arnold. He went on to work as a publisher, binder, and bookseller. (Even in the seventeenth century, the vocations still hadn't separated, but Mearne did have a Dutch bookbinder on his payroll.) 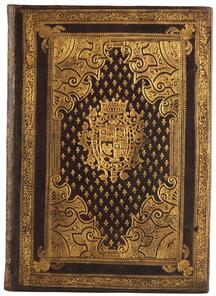 Regardless of whether Mearne himself actually bound every book that came out of his shop, he took a keen interest in bookbinding, and some of the most elaborate Restoration bindings are attributed to him. He's come to be associated with the cottage style, named because its designs look like the gables of a cottage. The rectangular lines enclosing the design are broken into gable-like elements at the top, bottom, and sides. The spaces were sometimes filled in with French-style branches and sprays, or with roundelles and other embellishments more typical of English bindings. The cottage style is one of the few distinctly English binding styles. It remained popular with relatively little variation until the first quarter of the nineteenth century--the greatest longevity of any binding style.

In 1678, Mearne's second son, Charles, joined him as a partner. By this time, Mearne had earned the post of Stationer and Bookseller to King Charles II. A leading member of the bookselling community, Mearne would also become Master of the Stationer's Company. By this time, it's unlikely that Mearne actually bound books himself anymore. But he passed down his tools, which were used by his successors well into the eighteenth century.

In our next installment, we'll meet Roger Payne, William Morris, and other figures who impacted the world of modern craft bindings.