To call T.S. Eliot the most important English-language poet of the 20th century doesn’t feel like too much of a stretch. His 1948 Nobel Prize is just one indicator of the lasting impact that poems like ‘The Waste Land’ (1922) and ‘The Love Song of J. Alfred Prufrock’ (1915) have to this day, and will no doubt continue to have as long as there are English professors and recreational readers of poetry in the world. In spite, or perhaps because, of the influence of Eliot’s poetry on the Anglophone poetic landscape, the man himself has remained something of an enigma since his death in 1965. Here are five things you may not know about T.S. Eliot.

1. His straight-laced demeanor was a sham

The popular image of T.S. Eliot has, for many years, been of an extremely formal and straight-laced figure (befitting his official occupation as a banker throughout much of his poetic career). To wit, Virginia Woolf, in a letter to her brother-in-law, once wrote, “Come to lunch. Eliot will be there in a four-piece suit.” Aldous Huxley referred to him as “the most bank-clerky of all bank clerks”. This air of formality, however, may have just been for show. During his time working at Faber & Faber, Eliot was known to prank board meetings and visiting writers with a wide array of props, from whoopee cushions and exploding cigars to firecrackers. Once in London, he and his nephew purchased stink bombs from a local joke shop and set them off inside of a hotel lobby.

2. He tried to suppress reprints and biographies

If his somber demeanor was just for the reading public’s benefit, Eliot certainly showed admirable commitment to it. Reportedly, he worked his will to expressly prevent anyone from writing his biography, and instructed his literary executors to keep most of his unpublished verse under wraps and refuse permission to reprint his works under most circumstance. As a result, it took scholars half a century to bring much of what we now know about Eliot (and much of what comprises his corpus) to light. 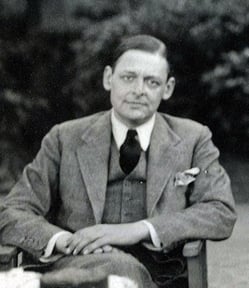 While Eliot’s most renowned work is certainly his poetry, he also wrote in a number of other genres. Most notably, he attempted to revive the bygone art of the verse drama, composing The Rock (1934) and The Cocktail Party (1949). Though Eliot would prove unable to successfully jumpstart a renewed era for the antiquated form dating back to the Ancient Greeks, he would prove to have an outsize impact on the world of musical theater. His book of feline-centric poems, Old Possum’s Book of Practical Cats (1939), originally composed for his god children, would become the basis of Cats (1980), one of the longest running musicals in Broadway history.

Another chink in Eliot’s armor of sober respectability was his deep love of the Marx Brothers in general and Duck Soup (1933) in particular. So great was his fandom, in fact, that the acclaimed poet briefly struck up an epistolary friendship with Groucho Marx. When the two finally met in person, however, any personal affection the two might have shared quickly fizzled. Groucho had been studying his poetry in order to be able to facilitate a literary conversation with one of the field’s best minds, but all Eliot would talk about was Duck Soup.

By the end of his life, Eliot was living in circumstances much changed from those of his early days as a writer. Where, decades previously, he had been in a disastrous marriage and Ezra Pound was trying to raise money for him, in his later years he entered into a much less terrible marriage (albeit to a former secretary of his who was more than 30 years his junior) and once gave a reading in Minnesota that drew just shy of 14,000 people.

He died of emphysema in London, having renounced his American citizenship, at the age of 76. On the second anniversary of his death, he was memorialized with a stone marker in Westminster Abbey, in the so-called Poets' Corner, which contains the graves of Shakespeare, Milton, Wordsworth, Tennyson, Browning, and a host of others. The first poet laid to rest in the space was Geoffrey Chaucer in the year 1400. Interestingly, though the whole Poet’s Corner tradition owes itself to the placement of his tomb, Chaucer’s burial in Westminster Abby was actually not a result of his fame as a poet, but to his position as the Palace of Westminster’s Clerk of Works.