This week we honor the life and genius of Winston Churchill. We do so knowing our honorifics pale beside those of former President Gerald R. Ford, given in London during 1983 to the English-Speaking Union. That address, captured for posterity in a first edition signed by President Ford, represents a historical intersection of two pivotal political figures: Churchill – who preserved the British nation; Ford – who stabilized and reinvigorated the Presidency after the Nixon resignation.

After striding as a Colossus through the British political landscape, Churchill is somewhat reduced in stature for many millennials. In 2010, a Royal Mint survey revealed 44 percent of British subjects aged 16-24 failed to recognize his picture. So it seems appropriate to seize the moment and remind people what a singular and larger-than-life existence Churchill led. For example: 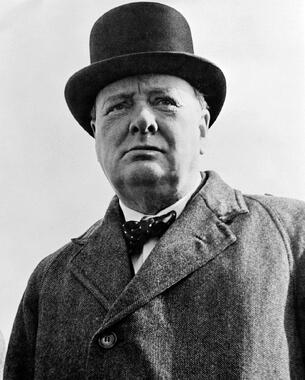 1. Where you start means little compared to where you finish.

As a youth, Churchill not only failed to set the academic world on fire, he hardly seemed to even carry a book of matches in his pocket. His entrance exams at Harrow, for instance (in his own words): “I did not do well in examinations. This was especially true of my Entrance Examination to Harrow. I wrote my name at the top of the page. I wrote down the number of the question. Thereafter I could not think of anything connected with it that was either relevant or true. I gazed for two whole hours at this sad spectacle: and then merciful ushers collected my piece of foolscap with all the others and carried it up to the Headmaster's table. “

Despite the stumbling start, as Boris Johnson points out, Churchill ran a race few of us could dream of matching: producing more published words than Shakespeare and Dickens combined, winning the Nobel Prize for literature, serving in every great office of state including prime minister (twice), indispensable to victory in two world wars and posthumously has paintings valued at more than a million dollars.


2. Bold action and good fortune can lead to remarkable circumstances.

Captured as an obscure newspaper correspondent during the Boer war, Churchill escaped from his South African POW camp, made his way to a rail yard and hid in a box car filled with sacks of coal. Realizing Boer troops would likely search again at the next town, Churchill waited for darkness and jumped into unfamiliar countryside from the moving train. Without food or water, he was soon forced out of hiding. Unbeknownst to Churchill, the closest country house belonged to a British sympathizer and he was greeted with the words, ““Thank God you have come here! It is the only house for twenty miles where you would not have been handed over.” Churchill made it back to British lines, returning to London as a national hero – and poised to begin his political career.


3. Even great men have bills to worry about.

Money worries nipped at Churchill’s heels for almost all of his adult life. His father, Lord Randolph Churchill was (unfortunately) the younger son of the Duke of Marlborough, who secured his fortune by marrying Jennie Jerome, daughter of Leonard Jerome, an American financier known as “The King of Wall Street” and frequent business partner of J.P. Morgan. Accustomed to an aristocratic life, little inheritance came Winston’s way and what he had was lost in the crash of 1929.

From that point forward Churchill’s sole means of supporting a highly extravagant lifestyle came from writing articles and publishing books. Few of his peers were aware of Churchill’s constant cash flow worries. Even fewer knew he worked prodigiously because – in the words of a close friend, ““if the music stopped, he would be insolvent”.

His salvation came in two forms: a complete lack of “writer’s block” and the discovery of dictation as an alternative to writing out content. Churchill created a factory approach to writing and employed a team of researchers and ghostwriters. He also developed a disguised working routine: after hosting dinner, Churchill would mimic his guests and appear to retire for the night. Instead, he walked to a suite of rooms where his staff worked with him until two or three in the morning. By the time he greeted guests at breakfast the next morning, new material was on its way to the publishers and he was a “man of leisure” again.


4. Personality can shine from small things.

At Churchill’s Chartwell estate, often one of a visitor’s most memorable and charming experiences is the sight of stuffed animals peeking out from the library shelves. Churchill was tremendously annoyed when books could not be found quickly. The solution he devised was to use small stuffed animals as library placeholders. The Chartwell staff professes that the animals seen in the library are legacies from Winston himself.