Four of the Earliest (and Most Remarkable) Publisher's Dust Jackets

The subject of early dust jackets has been somewhat neglected in bookish circles. After all, how can plain (and often tattered) paper compete with a beautiful binding beneath? Yet early dust jackets have an important place in book history, one full of uncertainty and mystery. Initially, dust jackets were intended to be disposable and thus, most were discarded and destroyed. Few early examples now remain and no one knows with any certainty when dust jackets were first produced by publishers. Moreover, even in cases where early examples have survived, many later disappeared again and remain lost to this day. Below, we detail four of the earliest (and most remarkable) publisher's dust jackets. 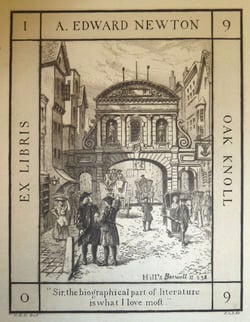 1. The Mystery of Edwin Drood

While certainly not the earliest known publisher's dust jacket, it likely would be the most valuable... if anyone could locate it, that is. This 1870 first edition by Charles Dickens was published in cloth with a plain jacket--the front was blank except for title, author and imprint; the spine listed the title and publisher. Only one example with dust jacket has ever been seen--part of the library of famous collector, A. Edward Newton. Moreover, it was the only dust jacket ever discovered for a Charles Dickens first edition. After Newton's death in 1940, his collection of some 10,000 volumes was sold at auction. The Mystery of Edwin Drood was part of this sale and since 1941, its whereabouts and ownership have been unknown.

A copy of the 1833 edition of this literary annual reigned as the earliest known dust jacket for some seventy five years. Author John Carter discovered the volume and chronicled his find in a 1934 article for Publisher's Weekly. According to an expert in the space, Mark Godburn, Carter brought the volume to a meeting of Oxford University bibliophiles in 1951 and while traveling the short distance between the Bodleian and his lodging, the dust jacket went missing. No one is sure how it happened, and the dust jacket has not been seen since. Fortunately, Carter had photographed the jacket before its disappearance. He later donated the jacketless book to the Bodleian. 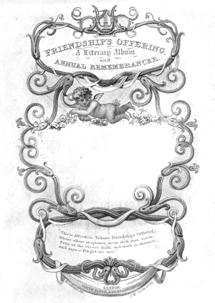 In 2009, the Bodleian searched its holdings for the lost dust jacket of The Keepsake. While it failed to do so, what it discovered instead was even more remarkable: the dust jacket for the 1830 edition of Friendship's Offering (published in 1829). While the Bodleian had known about this jacket in the 1970s (when it was discovered, uncatalogued, among other pamphlets), its existence was not made public until 2009. The jacket was designed to enclose the annual completely, and still bears signs of red sealing wax. Although the book itself is missing, this wrapper is now acknowledged as the earliest example of a printed publisher's dust jacket.

Published in 1819 by Riegel und Wiessner, this two volume set may be the earliest known publisher's dust jacket in existence. With original printed cardstock boards in the original colored plain-paper dust-jackets, Neues Taschenbuch Von Nürnberg is housed in the publisher's original cardboard slipcases with printed paper labels. These volumes provide a detailed description of Nürnberg; the plates, illustrations, and cover images depict many of Nürnberg's most famous attractions and personalities, including Albrecht Dürer and Peter Vischer. While it can be difficult to authenticate plain dust jackets, these are verified by the existence of an identical set which sold at auction with a matching description. Given that Neues Taschenbuch Von Nürnberg dates a full decade before Friendship's Offering, its significance to the history of early dust jackets is considerable.