Remember the film Easy A (2010), in which Emma Stone stars as a high-school student ostracized for her (invented) promiscuity? In the film, Stone’s character eventually takes to wearing a read letter “A” on her person in reference to Nathaniel Hawthorne’s seminal novel of adultery and Puritanism, The Scarlet Letter (1850), on which the film’s screenplay is partially based. In one sense, it’s amazing that Hawthorne’s novel, which was one of America’s first important literary works, continues to assert its cultural relevance in the 21st century. In another sense, though, we really oughtn’t be surprised. After all, there have been numerous instances of artists updating The Scarlet Letter for contemporary audiences. In one particular such instance, “contemporary” meant 1988, and the artist was the revered John Updike.

For those of you who don’t fully remember your high school English classes, The Scarlet Letter centers upon Hester Prynne, who gives birth to a child out of wedlock after her husband has been lost at sea for many years. Though she is publicly humiliated and essentially cast out of society (identified by the scarlet “A” for "adulteress" permanently affixed to her clothing), she refuses to name the father of the child, even after her husband returns under an assumed identity. In S. (1988), Updike brings the story into the 20th century and reimagines the story from Hester’s perspective. The novel centers on Sarah P. Worth, a middle aged woman married to a Massachusetts-area doctor. Through Sarah’s letters and tape recordings, the readers learn of her infatuation with Shri Arhat Mindadali, a Hindu mystic and guru. Sarah quickly abandons her husband for Arhat, following him to his ashram in Arizona, where she seeks spiritual enlightenment away from the life she had built for herself over the course of many years. 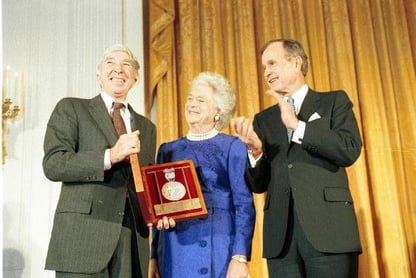 Much as Hawthorne’s portrait of Hester Prynne and her society was at once thoughtful and scathing, Updike strives for a sympathetic portrait of middle-aged womanhood, while also having a little fun at the expense of enlightenment-seekers as a group. Updike noted that, “the older I get the crabbier I get, and so the funnier the (work) wants to be.”

At the same time, he affirmed his commitment to hewing to Hawthorne’s goal of writing about “the truth of the human heart.” Whether or not he succeeded in recreating Hawthorne’s sally toward human truths, Updike certainly took the 19th century novelist up on his project more broadly.

In Updike’s mind, S. comprises the third work in a trilogy that includes A Month of Sundays (1973), which he described as “Dimmesdale's version of The Scarlet Letter, told in modern dress,'' and Roger's Version (1986), which reimagines the story from the perspective of Roger Chillingworth, Hester’s husband. 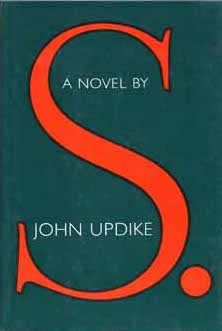 Of course, his ongoing interest in Hawthorne’s work wasn’t the only motivating factor behind the novel’s conception. The novel was, in many ways, meant as a rebuttal to the critics who have questioned Updike’s ability to create well-rounded female characters. Though Updike doesn’t go so far as to admit that he believes his critics to be correct, he allows that any criticism of his work gives him an opportunity to improve his craft. Though, in response to those who are troubled by the lack of business- and career-oriented women in his oeuvre, Updike notes, “The Witches of Eastwick (1984) was a very determined attempt to write about women who did have careers of a sort—they were professional witches. They were active and dynamic, they were much more dynamic than the men.”

In the few years since Updike’s death, S. has remained among his more obscure works, reaching only a fraction of the readers reached by Rabbit, Run (1960) and his other Rabbit Angstrom novels. Perhaps if the novel were reevaluated now, in an era where examinations of the ways in which society shames women seems especially urgent, it would be found worthy of its inspiration. Or perhaps readers would find that beneath Updike’s trademark lyricism (which abounds in the novel), his detractors had a point. Either way, it’s easy to see why Hawthorne’s story remains uppermost in the nation’s artistic consciousness, and we can only hope that, whatever guise she appears under, Hester Prynne continues to tell on the cruelties of “polite” society, “the world’s law (being) no law for her mind.”