Considered by some to be the most significant 18th century writer in French letters, Swiss philosopher Jean Jacques Rousseau changed the realm of political thought and moral psychology. As an original thinker, Rousseau inevitably made enemies and aroused suspicions in his day. His writings forced him into exile and earned him numerous rivals, including Voltaire. Rousseau became so paranoid that he could no longer distinguish the real from the imagined. A man of reason can give way to the most irrational of fears: This is one of the many contradictions that punctuates Rousseau's remarkable life. 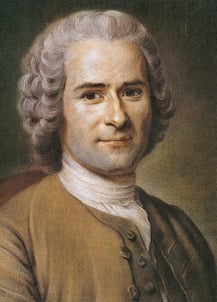 Rousseau’s mother died nine days after his birth, and his father vacillated between great affection for his children and despair over his wife’s death. While most would consider him blameless, Rousseau would always feel guilty about having played his natal role in the death of his mother. When he was sixteen, his father had to flee Geneva in fear of arrest. Rousseau was put under the aegis of Mme de Warens, who was thirteen years his senior. For a little while, Rousseau embraced the opportunity to claim Warens as the motherly figure he never had. However, things turned sour. Warens insisted on a sexual relationship between the two, which Rousseau obliged, corrupting his hopes for a kind of surrogate mother.

Throughout his life, what Rousseau wanted and what he did often betrayed each other. In his youth, Rousseau spent time as an engraver. He ran through dozens of employments, consistently blaming his failures on the injustice and cruelty of employers. His early writings reflect his personal conflict between his self-loathing and assertions of his superiority and talent. He found himself at once impotent and immensely powerful. What he knew and what he was capable of was at constant odds with who he was.

Rousseau wanted to be famous. Music, not philosophy, was his first gambit. He proposed his invention of a new system of musical notation, one based on numbers. It was rejected by the French Academy of Sciences in 1742.

As a philosopher, his writing was strengthened by a personal disposition that many people would consider hypocritical. Rousseau’s central claim is that humans are naturally good, and it is society that corrupts them by rewarding deceitfulness, exploitation, and one’s alienation from others. It is a bold insight, one that is often drowned out by interpretations of writers like Freud, who believe the human is a beast and society unnaturally suppresses its violent and selfish urges. Rousseau was certainly bold in his moral message. But would his insight have been possible if not for his own moral failings? 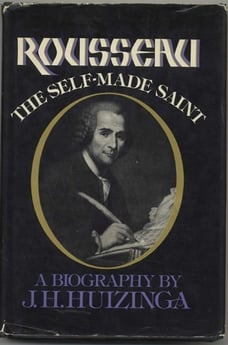 Rousseau warned the world that our obsession with status and admiration makes us unhappy and unkind. He believed humanity was doomed from the moment it began to groom itself as a sexual object. Yet, Rousseau was obsessed with self image. He desired fame and would do anything to continue his work. Even if it meant abandoning his children, five of whom he gave to a foundling hospital, which in his time, was nearly as good as a death sentence.

Contradictions abounded in his life. Although a supremely stylistic writer, he found himself no good at conversation. He switched from Calvinism to Catholicism then back to Calvinism. Despite being a man of letters, Rousseau once suggested that the arts and sciences were merely another faction of civilization that helps us to betray our good nature.

One wonders why hypocrisy and contradiction filled Rousseau’s life. It’s evidently not unusual for great moral voices to betray what they profess. Tolstoy, another proponent of nonviolence and compassion, was apparently not a great husband or father. Nor does the record of Tolstoy’s admirer Gandhi stand without blemishes. Is being a hypocrite essential to being morally astute? For if Rousseau is to propose a better morality, shouldn’t he be intimately familiar with the failings he aims to redress? The truth is, he was. As a critic of the corruptions of society, Rousseau had to first fall victim to its contamination. The very things he wanted to exorcise from society were the same demons he detested within himself.