Cooking is a skill everyone must utilize with varying degrees of success. There are people who struggle to turn on the correct stove burner when making pasta, others who are able to manage something edible, and some who create food to be savored, not just eaten. But after the skill-less, mediocre, and expert, there is another type of cook. These cooks are able to bring about new innovations and introduce previously foreign tastes to the public. One such cook was Julia Child who is credited with introducing French cuisine to the American public through her cookbooks and television shows. 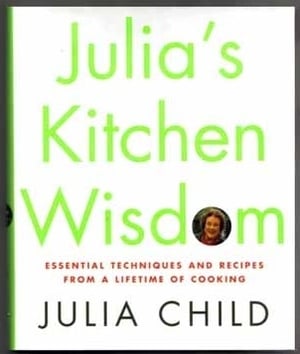 Born on August 15, 1912, Julia Child, née McWilliams, lived a life similar to many other upper middleclass American children. According to filmmaker Marilyn Mellowes, when Julia graduated from Smith College, she expressed a desire to be a writer, a goal she would achieve with the publication of her cookbooks later in her life. Julia joined the Office of Strategic Services (OSS) to support the war effort in WWII. During her time at the OSS, she was posted overseas, where she met Paul, her future husband. Julia and Paul moved to France due to Paul’s position in the State Department. It was during this time in France that Julia discovered her love for French cooking.

While living in Paris, Julia worked with Simca Beck and Louisette Bertholle to write a French cookbook for an American audience. It was during her time perfecting recipes that Julia fully discovered her love for cooking. Julia, Beck, and Bertholle struggled to find a publisher for their manuscript. Their original publisher repeatedly rejected their work despite major revisions. Eventually, the writers found a new publisher in Alfred Knopf. Mastering the Art of French Cooking was finally published in 1961. Julia and her husband were back in the States by the time of publication, allowing Julia to make television appearances to promote her book.

It was on the first of these appearances on Boston’s public television station that interest in a cooking show was expressed by viewers. In response, the station started production of “The French Chef.” The idea of French cuisine was embraced by Americans previously uninterested in cooking. Julia connected with her viewers in a way previously unseen in a television personality. Her relatability while on camera helped Julia to earn a Peabody and an Emmy and to become an American icon. Despite facing cancer, Julia was able to publish the second volume of Mastering the Art of French Cooking in 1970.

Using the fame earned from her cookbooks and television programs, Julia helped encourage the next generation of chefs. Thanks to her continued efforts, chefs started receiving recognition for their work rather than being ignored in the kitchen. Julia moved to Santa Barbara from the home she had shared with her husband until his death. The kitchen she used to create her famous recipes was moved and placed on display in the Smithsonian Institution. Julia died on August 12, 2004 leaving behind a legacy she never could have imagined as a young woman.

Over the course of her culinary carrier, Julia Child wrote over 15 cookbooks. Her first publication, Mastering the Art of French Cooking Volume 1 is credited as the first French cookbook tailored for an American audience. Even 57 years after publication, Mastering the Art of French Cooking is referenced and used by professional and recreational cooks. The legacy left by Julia includes not only her written works, television programs, awards, and The Julia Child Foundation, but also her impact on American culture. Referenced in various media forms from music to stage to film, Julia’s influence on the American public is still potent and pertinent.