Today we celebrate the inimitable Kay Thompson, born November 9, 1909 with the unpromising name Catherine Fink. A brilliant composer, dancer, singer, and author, Thompson was above all a tremendous personality.  In the words of film critic, Rex Reed, “If you don’t know who Kay Thompson is, please turn the page. You just flunked pizazz. Legend has it that she even invented the word.”

A gawky girl without much of a voice, Thompson was determined to be a star. When she announced to her family that she wanted to be a blues singer, they scoffed. Yet their skepticism was only fuel to the ambitious youngster. “If my sisters hadn’t made fun of my voice, I would never have buckled down to take singing lessons seriously. And if they weren’t so sure I could never become a singer, I wouldn’t have fought for a career,” Thompson explained. Using a keyboard as her guide, Thompson warbled low note after low note until, amazingly, she had stretched her voice an entire octave lower. When Thompson got her first singing gig, her father was stunned, “What! They pay you for making those noises that drive us crazy?” 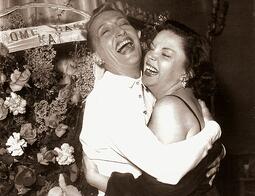 Thompson moved to Los Angeles when she was 17 and became a diving instructor at a summer camp. She had many singing jobs during the 1930’s but was fired from them all. Finally in the 1940’s she landed a position at MGM as a vocal coach and music arranger. There, she worked with Frank Sinatra, Gene Kelly, Lena Horne, and Judy Garland.

According to composer and co-worker Hugh Martin, “She was to vocal arrangements what Louis Armstrong was to jazz.” Indeed, Sinatra credited Thompson with teaching him everything he knew about singing. Horne called her “The best vocal coach in the world” and Thompson is widely credited with maturing Garland’s sound. Thompson and Garland became more than best friends, they were family. After Garland’s untimely death, it was Thompson who arranged her funeral. 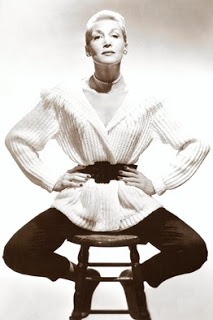 In 1947, Thompson was through with MGM, a time she described as a long headache. She was ready to perform in her own right, not as mere support for other stars. She began a nightclub act with Andy Williams and his three brothers in Los Angeles. The routine was a tremendous success, described by Walter Winchell as the greatest nightclub act in history. By 1955, Thompson moved her show to the Plaza hotel in New York City. There, a mutual friend introduced her to illustrator Hilary Knight, and the Eloise series was born.

Thompson had first created the character Eloise during her early days with the Williams brothers. She was late to rehearsal one day and one of her co-workers asked, “Who do you think you are, coming here five minutes late?” Thompson announced, “I am Eloise. I am six.” Thompson created stories about Eloise’s antics to entertain friends and would even answer the phone in her Eloise voice, making pronouncements like “Getting bored is not allowed.” Finally, when a friend insisted she meet an illustrator—Knight—she agreed.

After a brief encounter at the Plaza, “12 lines on a piece of paper” and “a few words of Eloisiana,” Knight drew the first picture of Eloise and mailed it to Thompson. “It was immediate recognition on my part,” Thompson said. “There she was, in person. I knew at once Hilary Knight had to illustrate the book.” The two hit it off, and in a few months Eloise was complete. 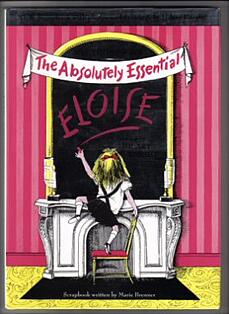 Published immediately by Simon & Schuster, Eloise exceeded all sales expectations.  One day after its release, a second printing was ordered. Eloise merchandise was everywhere. The Plaza had a special Eloise menu, Neiman Marcus featured an Eloise clothing line, and Lord & Taylor sold Eloise dolls. This was the high point of Thompson’s career. In 1957, she starred in Funny Face along with Fred Astaire and Audrey Hepburn. Thompson and Knight published three successful Eloise sequels by 1959.

Then, abruptly, Thompson pulled the plug. In a contract signed just before the publication of Eloise, Thompson retained complete control of the book and character. Tired of years of publicity and protective of Eloise, a character she increasingly associated with herself, Thompson moved to Rome in 1962. There, she restricted the marketing of Eloise, and forbade the printing of all Eloise sequels. Thompson became increasingly reclusive, rejecting all book and film offers, including one for The Pink Panther and another from Francis Ford Coppola.

By the end of her life, she had distanced herself from most of her friends and lived with her goddaughter Liza Minnelli in near seclusion. Thompson died July 2, 1998.  When asked about Thompson, Minnelli said, “Once upon a time there was this amazing woman who could do anything, and once you saw her do it, it was too late to analyze what it was she did because she had already changed your life forever.” Happy birthday, Kay.