Learning About the Baghdad Book Market

If you’re interested in rare book collecting or Arabic literature, we cannot emphasize enough the significance of the Iraqi literary and cultural traditions, and the importance of reimagining Baghdad outside the Western context of war, violence, and dictatorship. In 2015, the Los Angeles Times published an article entitled, “Iraq Book Market Comes Back to Life Seven Years After Bombing.” A number of other western and Arab media sites posted similar pieces, recalling a destructive bombing and signs of recovery in the nation’s capital city. Those stories were referring to Al Mutanabbi, or Mutanabbi Street, in Baghdad. For years, the street, which almost reaches the Tigris River, was known for its weekly book market. A car bomb devastated it in 2007, but it has again become a location for buying used and rare books in Iraq. 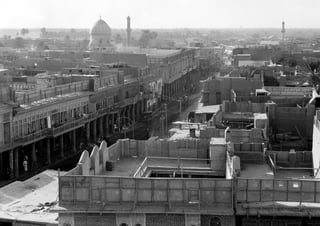 Mutanabbi Street gets very crowded, and many Iraqis and visitors to the city have been pleased to see that the outdoor book market has returned to this pedestrian area. The street is named for Abu Tayeb al-Mutanabbi, a 10th-century Iraqi poet. A statue of al-Mutanabbi stands near the docks on the Tigris, at the foot of the steps that lead to the book market. It seems only fitting that most visitors to the book market pass alongside the statute of the poet, which serves as a reminder of Iraq’s long literary history. The area is a mixed Shia-Sunni part of Baghdad. It has also become the cultural center of the city. Not only does the outdoor book market happen here, but tea shops, cafes, and stationers also line the street.

The Iraqi book market had been closed after the street was badly damaged by a car bomb. The bomb went off on March 5, 2007, killing 26 people and injuring around 100 people. In 2015, the street began returning to a place where booksellers and book buyers could meet. It’s promising that the book market has returned to Mutanabbi Street. However, as the Iraqi novelist Sinan Antoon notes, Baghdad is a “city of ghosts.” While the return of Mutanabbi Street might in some ways reveal a recovering city, at the same time, he voices a warning: “The problem that Baghdad has, like other great, iconic cities, is that sometimes the textual Baghdad overshadows the real Baghdad.” Focusing solely on Mutanabbi Street, Antoon suggests, could allow us to “forget the larger context [and] what conditions made the destruction possible.” 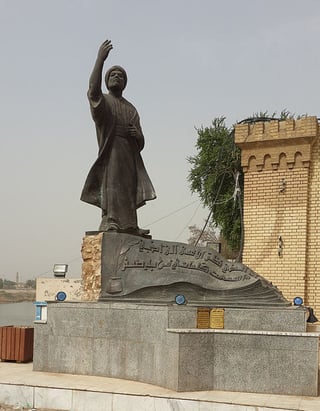 “This project was both a lament and a commemoration of the singular power of words. The books created used al-Mutanabbi and its printers, writers, booksellers, and readers, as a touchstone. These books made visible the literary bridge that connects us, made of words and images that move back and forth between the readers in Iraq and ourselves. These books showed the commonality of al-Mutanabbi Street with any street, anywhere, that holds a bookstore or cultural institution.”

Visitors to Baghdad can visit the book market on Mutanabbi Street once again. However, as Sinan Antoon wrote in The New York Times just last July, “Baghdad is one of the world’s least-safe cities, alongside Damascus, Syria.” And Antoon recalled that, in response to sharing his memories of walking through a Baghdad neighborhood with a friend, the friend responded, “[i]n Baghdad, taking a walk these days could take you to the cemetery.”

This year marked the tenth anniversary of the bombing of the Baghdad book market. Mutanabbi Street and its long literary and political history should give readers and book collectors a lot to ponder. And if you’re interested in learning more about Iraqi literature, we recommend picking up one of Sinan Antoon’s novels, or seeking out a recent translation of Abu Tayeb al-Mutanabbi’s poetry.