You can’t talk about the history of libraries without including the Library of Alexandria, that pinnacle of human knowledge and wisdom in the Ancient World. Like other aspects of far history, not very much is concretely known about the Library of Alexandria, but we can piece together what Ancient historians and thinkers have said about it. It is not just a matter of legend. 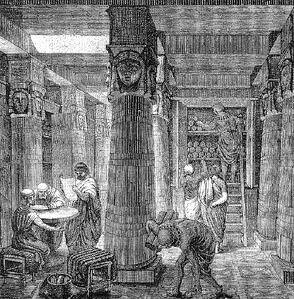 Sources mostly agree that the library was founded by the successor of Alexander the Great, Ptolemy I Soter, by the 3rd century BC. It was, of course, constructed in the port city of Alexandria on Egypt’s northern border. The library was either spread out over multiple locations or was just one in a series of cultural buildings. No one can be certain exactly where the books (or scrolls, in this case) were stored. The library is also believed to have contained extensive gardens, meeting rooms, reading rooms, lecture halls, and even a dining hall. One can see the model of the university already reflected in its design.

The Library of Alexandria was a gathering place for intellectual thought, philosophy, and curiosity. As such, it was dedicated to the Greek Muses, the nine goddesses of the arts. The library could more accurately be described as a “museum,” a word that directly references the Muses.

At the time of the library’s brilliance, papyrus scrolls were the preferred method of recording information. Made from the drying stems of marsh reeds, papyrus was able to be rolled but too brittle to be cut and folded. Thus, the scroll was popular before the codex (the rectangular block of paper you think of when you think of a book). The library could have held anywhere from 40,000 to 400,000 scrolls in its collection; estimates vary greatly.

Although papyrus was cheap to manufacture, it also deteriorated quickly. Scrolls would have been stacked horizontally on shelves or vertically in clay pots. Information about the scroll was written on a small tag attached to the end, much like a book’s spine. Galen, a Greek physician and philosopher, wrote that any ship which sailed into Alexandria’s harbor was asked to turn over their scrolls for copying in the library. The copy was returned to the owner, and the original was kept in the library. The thirst for knowledge was apparently never-ending.

Tradition holds that the Library of Alexandria was destroyed in a massive fire, symbolizing the destruction of knowledge and culture. In all likelihood, it was probably a number of small fires and earthquakes which eventually proved too much for recovery. Several accounts agree that at least part of the library’s collection was harmed by Caesar in 48 BC. From there, it may have survived until the 3rd or even 6th century. Most surviving accounts were written hundreds of years after the events themselves, so their reliability must be questioned.

The city of Alexandria is not without a library, however. A new Bibliotheca Alexandrina opened in 2002 as the premiere Egyptian library. At its opening, the library only had 500,000 items – a very small collection for its status. Another 500,000 were added in 2010 as a gift from the National Library of France. The Bibliotheca Alexandrina is now most notable for having the only external backup of the Internet Archive, which aims to create a digital library of websites and other forms (including video, audio, and digitized books).

The Library of Alexandria may have been lost to history, but its legacy is still alive in many ways.