Mystery Writers of America at the Lilly Library

Do you have an interest in crime writing and detective novels? You’re not alone. From the novels of Agatha Christie to the films of Alfred Hitchcock, Americans love a good detective story. The Mystery Writers of America, Inc. (MWA) is, according to the association itself, the “premier organization for mystery writers, professionals allied to the crime writing field, aspiring writers, and those who are devoted to the genre.” In other words, MWA promotes crime fiction, from those who write it to the readers who support it. Where can you go to check out the myriad of documents connected to this organization? The Lilly Library Manuscript Collections at Indiana University-Bloomington holds the complete papers of the organization, from correspondence to photographs to financial documents. If you’re interested in the modern history of crime fiction, you may not need to look any further than Bloomington, Indiana.

History of the Association 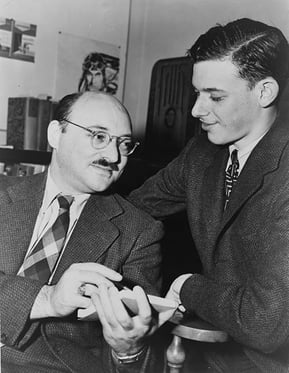 Believe it or not, MWA has been around since 1945, when it was established with the “purpose of promoting and protecting the interest and welfare of mystery writers and to increase the esteem and literary recognition given to the genre.” While the organization began in the mid-twentieth century, it reaches much farther back into the history of this genre of writing. The MWA annually sponsors the Edgar Awards Dinner at Symposium, in which the best detective fiction of the year receives an award. The award, according to the Lilly Library, is “widely acknowledged to be the most prestigious award in the genre.”

Some of the earlier members and organizers included Fred Dannay and Manfred Lee, Dorothy B. Hughes, Howard Haycraft, and Erle Stanley Gardner. Do these names sound familiar to you, yet you’re unable to place them? We can help you out. Fred Dannay and Manfred Lee were two cousins from Brooklyn who are much better known to the American public by their pseudonym, Ellery Queen. The pair started publishing in the late 1920s and continued through the early 1970s. You probably know some of the early Ellery Queen works best, such as The Roman Hat Mystery (1929), The Egyptian Cross (1932), and The Siamese Twin Mystery (1933).

And how about Dorothy B. Hughes? Hughes was one of the lone female writers of the hardboiled detective novel. She famously wrote In a Lonely Place (1947), the novel that would become a Humphrey Bogart masterpiece directed by the inimitable Nicholas Ray. Howard Haycraft was best known as an editor of detective fiction anthologies, and his personal papers are held at the University of Minnesota’s Special Collections and Rare Books library. And you just might known Erle Stanley Gardner better than any of the others—this author created the famous Perry Mason series of detective fiction. 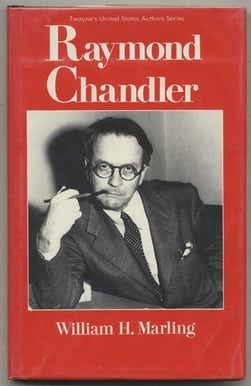 If you’d like to take a look at the collection, you’ll need to schedule a visit to Bloomington. But we can give you an idea of some of the items you’re likely to find. The manuscript collection is divided into eleven separate sections, including: administrative materials (such as election notes), correspondence, events, legal and financial documents, photographs, and audio-visual material. The subject files in the collection are listed alphabetically, highlighting famous crime writers such as Raymond Chandler.

The archive officially includes all materials related to the organization from 1946-2002, but the collection actually stretches to 2008 in its subject files. And MWA continues to thrive. For example, Craig Johnson, the author of the now-famous Longmire detective series (about a Wyoming-based sheriff) recently served on the board.

If you can’t make it out to Indiana anytime soon, we recommend browsing the finding aid or inventory list available online through the Lilly Library. You’re likely to discover some writers you’d like to explore. And if you happen to be in Indiana, the archive welcomes scholars and interested parties alike. Why not take a look?