J.R.R. Tolkien was born in South Africa in 1892. He spend his early years there, returning to his parent's native England to visit, but staying permanently after the death of his father. It was during this time that he became familiar with the landscape of the country he would come to love, visiting villages and countrysides that would become he basis for the most famous of his creations: Middle Earth, the setting for The Lord of the Rings trilogy and The Hobbit, the language and mythology of which would become his life's work. One such place was his aunt Jane's farm, called Bag End, which he later used for the name of Bilbo Baggin's home in The Shire. After his mother's death, he and his brother were raised in Birmingham where Tolkien continued his education. It was during this time Tolkien first became interested in creating languages, an interest that followed him into adulthood and is clearly seen in The Lord of the Rings series, which utilizes several invented languages, most famously, Tolkien's Elvish. He went on to study English language and literature at Oxford where he graduated with honors. After serving in World War I, he began his career in academia, serving as a professor at University of Leeds. He published several notable works of scholarship during this time. He also wrote The Hobbit and the first two volumes of The Lord of the Rings. He published the final volume of The Lord of the Rings in 1948. Tolkien's works took on a near-cult popularity during his lifetime, creating a boom in the fantasy genre and inspiring other works and games, such as roleplaying game Dungeons & Dragons. The books have been adapted into animated films and famously, two sets of trilogies directed by Peter Jackson. They continue to be immensely popular today and a television series based on the mythology of Middle Earth is in the works for Amazon Prime. Today we take a look at some of the best quotes from each of the books in The Lord of the Rings trilogy:

The Fellowship of the Ring: 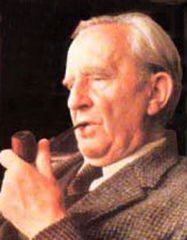 1. "All that is gold does not glitter,
Not all those who wander are lost;
The old that is strong does not wither,
Deep roots are not reached by the frost.

From the ashes a fire shall be woken,
A light from the shadows shall spring;
Renewed shall be blade that was broken,
The crownless again shall be king."

2. “I wish it need not have happened in my time," said Frodo.
"So do I," said Gandalf, "and so do all who live to see such times. But that is not for them to decide. All we have to decide is what to do with the time that is given us.”

3.“My dear Frodo!’ exclaimed Gandalf. ‘Hobbits really are amazing creatures, as I have said before. You can learn all that there is to know about their ways in a month, and yet after a hundred years they can still surprise you at a pinch.”

4. “It's like in the great stories, Mr. Frodo. The ones that really mattered. Full of darkness and danger they were. And sometimes you didn't want to know the end… because how could the end be happy? How could the world go back to the way it was when so much bad had happened? But in the end, it’s only a passing thing… this shadow. Even darkness must pass.”

5. And so Gollum found them hours later, when he returned, crawling and creeping down the path out of the gloom ahead. Sam sat propped against the stone, his head dropping sideways and his breathing heavy. In his lap lay Frodo's head, drowned in sleep; upon his white forehead lay one of Sam's brown hands, and the other lay softly upon his master's breast. Peace was in both their faces.
Gollum looked at them. A strange expression passed over his lean hungry face. The gleam faded from his eyes, and they went dim and grey, old and tired. A spasm of pain seemed to twist him, and he turned away, peering back up towards the pass, shaking his head, as if engaged in some interior debate. Then he came back, and slowly putting out a trembling hand, very cautiously he touched Frodo's knee--but almost the touch was a caress. For a fleeting moment, could one of the sleepers have seen him, they would have thought that they beheld an old weary hobbit, shrunken by the years that had carried him far beyond his time, beyond friends and kin, and the fields and streams of youth, an old starved pitiable thing

6. He raised his staff. There was a roll of thunder. The sunlight was blotted out from the eastern windows; the whole hall became suddenly dark as night. The fire faded to sullen embers. Only Gandalf could be seen, standing white and tall before the blackened hearth.

The Return of the King 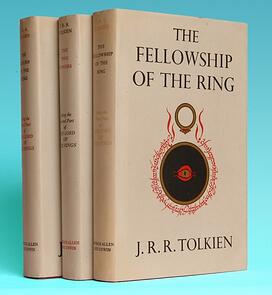 7. “But no living man am I! You look upon a woman. Éowyn I am, Éomund's daughter. You stand between me and my lord and kin. Begone, if you be not deathless! For living or dark undead, I will smite you, if you touch him. “

8. And the ship went out into the High Sea and passed into the West, until at last on a night of rain Frodo smelled a sweet fragrance on the air and heard the sound of singing that came over the water. And then it seemed to him that as in his dream in the house of Bombadil, the grey rain-curtain turned all to silver glass and was rolled back, and he beheld white shores and beyond them a far green country under a swift sunrise.

9. “But do you remember Gandalf’s words: Even Gollum may have something yet to do? But for him, Sam, I could not have destroyed the Ring. The Quest would have been in vain, even at the bitter end. So let us forgive him! For the Quest is achieved, and now all is over. I am glad you are here with me. Here at the end of all things, Sam.”