Harriet Beecher Stowe’s Uncle Tom’s Cabin is cultural dynamite. Within three months of its publication in 1852, 300,000 copies of the novel were sold in the United States. Many believe the events in Stowe’s book helped propel the United States into the Civil War. Even now, Uncle Tom’s Cabin remains one of the most widely read and acknowledged abolitionist works of all time. Today, we explore Harriet Beecher Stowe’s inspiration for her characters and storyline. 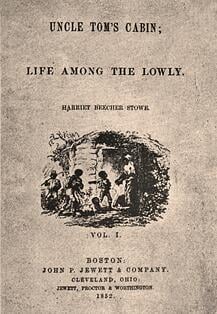 Although Stowe maintained that there was not one singular “Uncle Tom” figure upon which she based her novel, she cited Josiah Henson as a “parallel instance.” Henson dictated his own memoir, The Life of Josiah Henson, Formerly a Slave, Now an Inhabitant of Canada, as Narrated by Himself, which was first published in 1849. It was later expanded and republished in 1858 and then again, published under the name, Uncle Tom’s Story of His Life in 1876. Stowe provided a preface to the latter version. In it, she stated, “Among all the singular and interesting records to which the institution of American slavery has given rise, we know of none more striking, more characteristic and instructive, than that of JOSIAH HENSON.”

Josiah Henson was a slave in Charles County, Maryland. His memoir describes his brutal childhood, watching as his siblings were sold to other slave owners while his mother begged the man who bought her to also purchase her son.

As he grew, Henson noted that he was given more responsibilities from his owner, Isaac Riley, who trusted him as a good worker. Riley even agreed to a deal with Henson and said he could buy his freedom for $450. Although Henson had opportunities to escape — most notably when he was in charge of chaperoning a group of slaves as they ventured to Kentucky to work for Riley’s brother, Amos — he recalled that he wanted to purchase his freedom as he had agreed to do.

Henson raised the funds by preaching, and gave Riley a $350 goodwill payment. Riley eventually duped him and upped the stakes of the bargain to $1,000. As further betrayal, Isaac Riley conspired with Amos Riley to have Henson sold in New Orleans. On the trip there, Henson nursed Amos Riley’s son back to good health, but it did little to change what seemed to be his inevitable fate. So, he fled with his wife and children and after six weeks as a fugitive, found freedom in Ontario, Canada. There, he sheltered other newly freed slaves and encouraged self-sufficiency. He became a sort of figurehead for the abolitionist movement, lecturing around the world to draw attention to the injustices at hand. Truly, Josiah Henson seems likely as the primary inspiration for Uncle Tom's Cabin.

Other Potential Inspirations for "Uncle Tom"

Harriet Beecher Stowe spent much time (approximately 20 years) living in Cincinnati, Ohio, directly across the boarder from then slave-state, Kentucky. There, she was exposed to the harsh reality faced by many African Americans, both while they sought asylum in the North through the underground railroad, and as she heard their stories of time spent as slaves in the South. Stowe’s ‘access’ to numerous accounts of slavery makes it easy to see why, as Stowe claimed in her follow-up work, A Key To Uncle Tom’s Cabin (1853), no, one person can be credited as the sole inspiration for Uncle Tom.

Still, more recently, Susanna Ashton, an American Literature professor at Clemson University, posits that it was the slave whom Stowe helped stowaway while living in Maine who was the inspiration for her powerful novel. Ashton claims that man was John Andrew Jackson. Ashton discovered that Jackson met Stowe before she had written Uncle Tom’s Cabin which led her to believe that he could be Stowe's source. Jackson wrote of the meeting that after Stowe and her family took him in, “She listened with great interest to my story.”

That we don’t know the exact person or persons who incited Harriet Beecher Stowe’s Uncle Tom's Cabin does not detract from the fact that the book served as a powerful catalyst for change in the United States.