Nadine Gordimer, Nobel Laureate and anti-apartheid activist, died peacefully in her home Sunday evening with her children at her side. 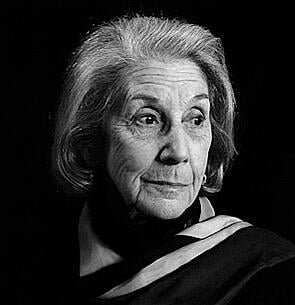 Born  November 20, 1923, Gordimer was born outside Johannesburg, South Africa to immigrant European parents. She won the Nobel Prize in Literature in 1991 for “her magnificent epic writing” that has been “of very great benefit to humanity.”

Gordimer’s works explore themes of morality and racism—particularly relating to apartheid in South Africa. The apartheid regime banned three of her books: A World of Strangers, Burger’s Daughter, and July’s People. She was an active participant in the anti-apartheid movement, joining the banned African National Congress after the Sharpeville massacre in 1960.

Although it was banned by South African censors, Nelson Mandela read Burger’s Daughter while in jail and afterwards sent Gordimer a “letter of deep, understanding acceptance about the book.” Mandela wrote in his autobiography that Gordimer’s work had taught him about “white liberal sensibility.” After his release in 1990, Mandela requested to meet with her and the two remained in touch until his death.

Gordimer began her writing career writing short stories for the New Yorker and leading literary journals. Her first novel, The Lying Days, was published in 1953. In addition to her Nobel Prize, she was a recipient of numerous other awards and honors including the Booker Prize (1974) and Legion of Honor (2007).