Should O Henry Get a Presidential Pardon?

Plenty of famous authors have written masterpieces from behind bars: Miguel de Cervantes began Don Quixote while doing time for tax irregularities in Algiers, while Fyodor Dostoyevsky narrowly missed his date with a firing squad, allowing him to write Notes from the Underground. 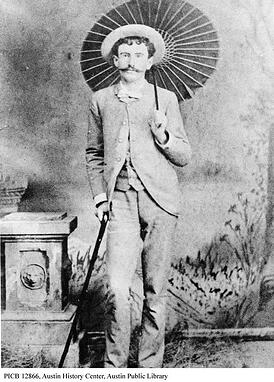 William Sydney Porter, better known by his favorite pseudonym, O Henry, was likely the most prolific author-in-residence at a prison. The master of short fiction served three years at the Ohio State Penitentiary for embezzling money from the First National Bank of Austin.

Sentenced to five years in prison, O Henry proved a model inmate. He was permitted to walk freely on the prison grounds and among the adjacent administrative buildings, essentially moving about as a free man. During his incarceration, O Henry did not earn a single demerit on his prison record, and his sentence was reduced by a full two years thanks to his good behavior.

The prison doctor observed that he'd never seen another prisoner "so deeply humiliated by imprisonment." Indeed, O Henry did everything within his power to hide his criminal past from his own family and from the reading public. He told his own daughter that he was simply out of town writing stories. And after his release, O Henry took his family to New York for a fresh start.

Given O Henry's immense shame regarding his criminal past, it's no wonder that he never sought a presidential pardon on his own behalf--even though he'd likely have gotten it. Theodore Roosevelt, president during the last years of O Henry's life, generously awarded pardons. He even pardoned O Henry's friend Al Jennings, a convicted train robber who often bragged about his crimes. Roosevelt also greatly admired O Henry, noting that during his tenure as New York police commissioner, O Henry's stories had moved him to advocacy for the city's overworked, underpaid shop girls.

A New Approach to Winning a Presidential Pardon

After O Henry passed away, others sought a pardon on his behalf. Former North Carolina Senator Jesse Helms wrote a letter, as did the O Henry Museum in Austin. But both of these entreaties were informal. In 2012, Professor PS Ruckman and journalist Scott Henson decided to take a different approach.

It all started in November 2011, when President Barack Obama "pardoned" two turkeys to spare them from becoming Thanksgiving dinner. In his speech, President Obama quoted O Henry's "Two Thanksgiving Day Gentlemen," calling Thanksgiving the "one day that is ours...the one day that is purely American." Ruckman decided that Obama might be willing to grant O Henry a pardon, given that he'd evoked the famous author when pardoning a pair of lowly fowl.

Unlike his predecessors, Ruckman decided to file a formal appeal for a pardon. He teamed up with Henson and thoroughly researched O Henry's case. Previous pardons had been denied because O Henry was dead; posthumous pardons are exceedingly rare. But Ruckman and Henson hoped that O Henry's status as a beloved author would prove sufficient.

While previous pardon requests had been made on the basis of wrongful conviction, Ruckman and Henson focused narrowly on what they considered overwhelming evidence of O Henry's complete rehabilitation. They noted that O Henry was a first-time offender who received a significant sentence reduction for good behavior and earned no demerits during his incarceration. They also noted that O Henry never ran afoul of the law again, and that he made a name for himself as a favorite short story writer of all time (only Rudyard Kipling sold more hardback copies of his short stories than O Henry).

Yet US Pardon Attorney Donald Rodgers remained unmoved. He summarily rejected the pardon request, saying that O Henry's "literary works in and of themselves do not establish rehabilitation." Rodgers also said that corroborating Ruckman and Henson's claims about O Henry's spotless prison record would be too onerous for the court. Ruckman has vowed that he will petition the US Pardon Attorney every year. He may have to wait for a new president to take office; President Obama has been notoriously reluctant to grant pardons. Meanwhile, Rodgers and his office are under investigation for the mismanagement of pardon applications.

Would You Pardon O Henry?

But what if Rodgers and his predecessors were right in denying O Henry's presidential pardon? Evidence strongly suggests that O Henry doesn't deserve a tarnished legacy.

On the other hand, O Henry's detractors also point to a few other factors that indicate guilt:

If the decision were yours, would you pardon O Henry? Leave your thoughts below in the comments!