Songs for the Philologists: The Ultimate Tolkien Collectible

J. R. R. Tolkien is known as the “father of high fantasy” yet the resonance of his work cannot be limited to one genre. Tolkien’s novels, particularly The Hobbit (1937) and The Lord of the Rings (1954-1955), were much more than tales of elves and dragons. Tolkien believed that all myths contain “fundamental truths” that speak deeply to the human condition. His novels are imbued with such primordial themes and they have forever changed the face of literature.

Tolkien’s followers are notoriously zealous, and the same is true for those who collect his work. Tolkien’s writing is sought by book collectors both for the passion it inspires and for its increasing relevance. Of all his publications, one is exceptionally rare - indeed, only an estimated fourteen copies remain in existence. Eight reside in libraries across the world, and the other six are owned privately. With its exceptional scarcity, the pamphlet Songs for the Philologists is the pinnacle of a Tolkien collection. 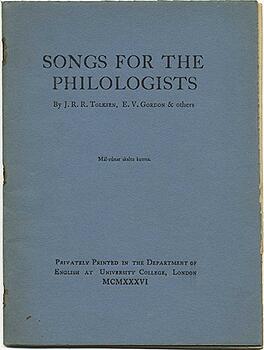 While working as a professor at the University of Leeds, Tolkien and his colleague E. V. Gordon founded the “Viking Club” – a society dedicated to drinking beer and reading Icelandic sagas. The group composed their own poems and songs in Old English, Old Norse, or extinct Germanic languages. One member, A. H. Smith, later compiled these works and printed them as a pamphlet with his students at the University College London. Realizing that he lacked permission from Tolkien and Gordon, Smith did not distribute the work but instead put it in storage.

The building that housed the pamphlets was bombed during World War II and all copies of Songs for the Philologists burned. All, except for those taken by the students who had helped print the work. An estimated thirteen to fourteen booklets survived the war.

Of these, perhaps the most remarkable is The Root of the Boot which appeared in a revised form (titled “The Stone Troll”) in both The Lord of the Rings and The Adventures of Tom Bombadil. In early versions of The Lord of the Rings, Frodo sings the song at The Prancing Pony. In the final version, Sam sings it during “Flight to the Ford.” After his performance, Frodo comments, “I am learning a lot about Sam Gamgee on this journey. First he was a conspirator, now he’s a jester. He’ll end up by becoming a wizard – or a warrior!”

Although many of Tolkien’s contributions to Songs for the Philologists are lighthearted, their inclusion in his other works reveals the earnestness with which he composed them. The songs reveal Tolkien's thoughts and preoccupations as a young man, ideas that later germinated into Tolkien's greatest works.