Thomas Stearns Eliot was born in St. Louis, Missouri in 1888.  A Nobel laureate, The New York Times described his writing as giving "new meaning to English-language poetry,” Due to a congenital double hernia, T. S. Eliot spent much of his childhood reading rather than running around with other children. His family eventually moved to New England where he attended Harvard. At age 22, he moved to Paris; four years later, he married Vivienne Haigh-Wood.  He later claimed, “To her, the marriage brought no happiness. To me, it brought the state of mind out of which came The Waste Land." 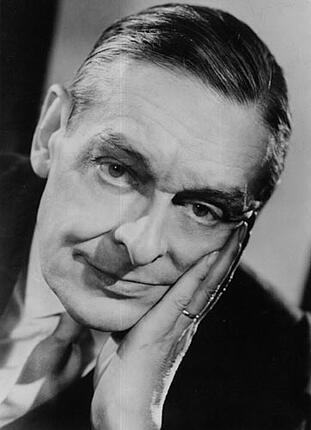 Although this is a disheartening statement to make about one’s marriage, it is difficult to mourn the writing of The Waste Land. This poem, heavily edited by lifelong friend Ezra Pound, defies classification. It jumps in and out of narrative voices, referencing everything from Wagner to the Psalms to Shakespeare to tarot cards in a disjointed but fluid series of images. Writing occasionally in German, occasionally in Greek, Eliot managed to embed a Shakespearian Sonnet in an otherwise largely un-rhyming poem. It is brilliant and very bleak.

Eliot was also an accomplished playwright. Much like The Waste Land, his play, The Cocktail Party, explores Eliot's disenchantment with marriage. Centering around the infidelity, split, and eventual reconciliation of a couple, The Cocktail Party is Eliot’s version of a drawing room comedy. It explores issues of isolation and social expectations, freedoms and constrictions - whether self-imposed or otherwise. It is in this play that he famously claims “Hell is oneself,  Hell is alone, the other figures in it  merely projections. There is nothing to escape from and nothing to escape to. One is always alone.” 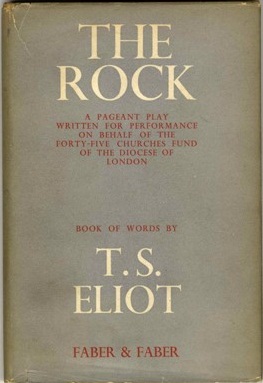 Much of Eliot’s writing is illustrative of the Lost Generation, of which he was a part. Suffering from the same disillusion as many others of the World War I generation, he eventually sought reason and meaning in the Church of England. Still, the characteristic vague despair runs though his post-conversion writing as well.

This is beautifully illustrated in his play The Rock.  Musing on an increasingly godless world, he wonders, “Where is the Life we have lost in living? Where is the wisdom we have lost in knowledge? Where is the knowledge we have lost in information?”  The play in its entirety is quite rare. The more famous “choruses,” spoken by groups of workmen were later published in his collected works of poetry. Beautiful and sad, they contain poignantly critical lines such as, “the wind shall say: 'Here were decent godless people: / Their only monument the asphalt road / And a thousand lost golf balls.’”

In 1948, Eliot was awarded both the Nobel Prize for Literature and the Order of Merit in England. He died of emphysema on January 4, 1965 at his home in London.