Ten Facts You Should Know about Jane Goodall

Jane Goodall is the world’s foremost expert in chimpanzees. Born April 3, 1934, she spent 45 years studying wild chimpanzees in Gombe Stream National Park, Tanzania. In addition to being honored as Dame Commander of the Order of the British Empire, she was named a United Nations Messenger of Peace in 2002. She has received many awards including the French Legion of Honor, the Medal of Tanzania, the Kyoto Prize, and the Tyler Prize for Environmental Achievement. Yet, not only did Goodall make lasting contributions to science and environmentalism, she led a fascinating life. Learn ten interesting facts about Jane Goodall below: 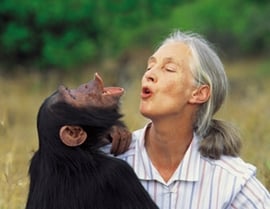 1. Jane Goodall was first introduced to chimpanzees when she was a baby. Her father presented her with a toy chimpanzee when she was one year old. Goodall named it Jubilee and for years the toy remained by her side. Even now, Goodall keeps Jubilee on her dresser.

2. As a child, Goodall loved books about animals and Africa, especially The Story of Dr. Dolittle and Edgar Rice Burrough’s Tarzan series. However, Goodall was disdainful of Tarzan's romantic interest, Jane Porter, and thought that she would be a better romantic match for the tree-swinging hero.

3. Goodall observed animals from a young age. Once, she sat for five hours in her family’s chicken coop to watch a hen lay an egg. When she finally came out, Goodall discovered that her family was frantic and had called the police to report her missing.

4. When Goodall graduated from high school, she couldn’t afford college tuition. Instead, she worked for years as a secretary, a waitress, and a filmmaker’s assistant.

5. Goodall first traveled to Africa when she was 23 years old to visit a friend in Kenya. There, she met famous anthropologist Dr. Louis S. B. Leakey who hired Goodall as his assistant. He later sent her to Tanzania to observe chimpanzees. 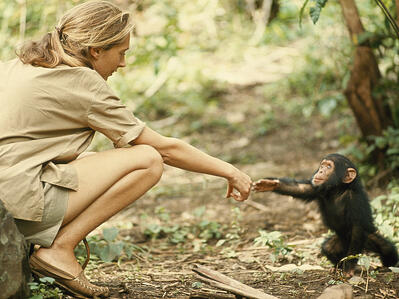 6. When Goodall first traveled to Tanzania in 1960, the British government mandated that she have a travel partner—it was deemed inappropriate for her to travel alone. So her mother joined her on the journey.

7. Shortly after working in Tanzania, Goodall made two revolutionary observations about chimpanzees: 1) that they used tools, a behavior previously attributed only to humans; 2) chimpanzees were not vegetarian. Following these discoveries, National Geographic sponsored Goodall’s work, sending photographer Hugo van Lawick to document Goodall and the chimpanzees. Van Lawick and Goodall married in 1964.

8. Goodall entered Cambridge University as a Ph.D. candidate in 1962—one of the first Ph.D. students accepted by the university without a college degree. She graduated in 1966 with a Ph.D. in Ethology. Her thesis was titled,  "Behaviour of the Free-Ranging Chimpanzee."

9. Despite being recognized as the world’s foremost expert in chimpanzees, Goodall’s work has not escaped controversy. Some scientists disapproved that Goodall named chimpanzees rather than assigning them numbers. Others criticized her for using feeding stations to attract chimpanzees, arguing that she disrupted natural feeding patterns and encouraged aggression in the animals.

10. Goodall’s books—especially Through a Window and In the Shadow of Man—became so popular that the chimpanzees she worked with became internationally, and individually, known. When one of the chimpanzees died—old Flo—the London Times printed an obituary.