The Art and Life of Eric Carle

Few children's book illustrators create work as recognizable as that of Eric Carle. His work has been published across the world, translated into sixty-six languages. His dedication to creating fun, playful books for young children has spanned over four decades and has resulted in books that generations of children have not only loved, but have grown up to share with their own children. Let's take a closer look at the life and work of one of children's book illustration's most celebrated artists:

Biography
Eric Carle was born in 1929 in Syracuse, New York. He and his family moved to his parents' native Germany when he was a child. During World War II, he and other boys his age were conscripted by the German army and were forced to dig trenches. In spite of the horror and trauma of this experience, Carle went on to graduate from the prestigious German art school, the State Academy of Fine Arts in Stuttgard. He also studied at the Academy of Fine Arts in Vienna. He returned to the US, which he had always remembered fondly, after completing his education. He worked as a graphic designer for The New York Times until he was drafted into the Korean War. He returned to his job after his release from the army. His career as a picture book writer was not something he sought out; instead, it found him. In 1967, writer Bill Martin, Jr reached out to him, having been impressed by his collage art image of a lobster in an advertisement. The result of their collaboration is the classic Brown Bear, Brown Bear, What Do You See? The pair continued their collaboration for many years. In 1968, Carle published his first book both written and illustrated by himself. To date, he has published over seventy books, forty of which are still in print. 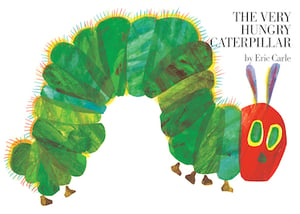 The art style that so impressed Martin and which Carle is best known for is collage. At the time when Carle started out as a graphic artist, collage was not a popular medium. Carle creates his own patterns for his collage by painting layers of color onto tissue paper. To achieve the unique look his illustrations are known for, he then layers that tissue paper onto tracing paper, glues it together with wallpaper paste, and cuts out shapes.  He later adds in detail with crayon and colored pencil. Carle has made a career of beautiful collage and has even published a book instructing children on how to make there own attempts at this medium, You Can Make a Collage: A Simple How-To Book.  He has also released a biography/art book, The Art of Eric Carle, which contains stories from his past, details of his process, and over sixty color prints of his most famous work.

The Very Hungry Caterpillar
In 1969, Carle published the second book both written and illustrated by him: The Very Hungry Caterpillar. This iconic book was inspired by a hole punch and began as an attempt to tell a story utilizing holes in the pages. The book tells the story of a hungry little caterpillar as he eats his way through numerous foods, builds a cocoon, and transforms into a beautiful butterfly. It has entertained children for over fifty years while also teaching them about the life cycle of a caterpillar, basic counting, and the days of the week. In 2009, a pop-up edition was published in celebration of the book's 40th anniversary. Both tradition and pop-up are excellent editions to collector's shelves. The Very Hungry Caterpillar has been adapted into film and video games and has spawned numerous other titles featuring the bright green and red caterpillar, who in the years since the book's publication, has become someone of a mascot for Carle.

Legacy
In recognition to his contributions to children's literature, Carle has been awarded numerous honorary degrees and awards. He was nominated for the prestigious Hans Christian Anderson Award in 2010 and was awarded the Children's Literature Legacy Award (formerly the Laura Ingalls Wilder Award) in 2003. He also has been given the Original Art Lifetime Achievement Award from the Society of Illustrators and the NEA Foundation Award for Outstanding Service to Public Education. Carle and his late wife founded The Eric Carle Museum of Picture Book Art. The museum as over 7300 permanent collection illustrations as well as rotating exhibits and artwork on loan as well as a scholarly and research library.