The Ghosts of Literary Collaboration

Few writers exist in isolation. Instead, most benefit from some type of support, whether from an editor, mentor, or friend. As a work grows, each individual who touches it leaves an indelible mark. The line between author and collaborator begins clearly enough, but authorship can grow murky the longer the collaboration takes place. In Lyrical Ballads, Nostromo, and The Waste Land, multiple writers shaped the final product. Yet the work of those not included in the byline has largely faded to obscurity. Today we explore a few famous cases of (potential) ghostwriting from the world of literature. 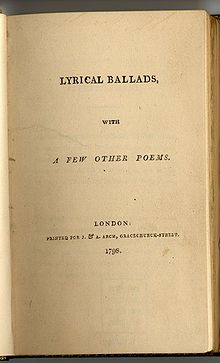 William Wordsworth and Samuel Taylor Coleridge published Lyrical Ballads in 1798. This collection of poems marked the beginning of the Romantic Movement in England and remains one of the most famous collaborations in English literature. According to Wordsworth, the poems were “experiments… written chiefly with a view to ascertain how far the language of conversation in the middle and lower classes of society is adapted to the purpose of poetic pleasure.” In plain language, they sought to describe the natural world and simple people. Written at a time when poetry was a lofty enterprise read only by the educated, their approach was revolutionary and the critical reception of the poems was harsh. Perhaps it was in anticipation of negative reviews that they published the first edition anonymously.

The initial volume of Lyrical Ballads opened with Coleridge’s “Rime of the Ancient Mariner.” In subsequent editions, Wordsworth moved the revised poem to the end and removed another of Coleridge’s poems entirely. The second edition, published two years later, was attributed solely to Wordsworth, mentioning only the assistance of “a friend” who had helped “for the sake of variety.” Records clearly indicate that the decision to attribute Lyrical Ballads to Wordsworth was a mutual decision by the two authors, perhaps a result of Coleridge’s reverential attitude towards Wordsworth. Coleridge remained unassociated with Lyrical Ballads until nearly two decades later, when he published “Rime of the Ancient Mariner” in a separate volume.

Although certainly not his most famous work, Nostromo by Joseph Conrad is acclaimed as “one of the finest of all English historical novels.” Conrad’s masterpiece explores themes of imperialism, capitalism, and social justice in a fictional South American country. Writer F. Scott Fitzgerald said, “I’d rather have written Nostromo than any other novel.” It seems Fitzgerald was not alone in this ambition; Ford Madox Ford claimed actual authorship of parts of the book. By the time of its publication in 1904, Conrad had completed two collaborations with Ford: The Inheritors (1901) and Romance (1903). His friendship with Ford was at its peak during his composition of Nostromo, with the Conrad and Ford families living “practically next door.” In a letter, Conrad once suggested selling one of Ford’s stories as his own. “I’ll put in a few of my jargon phrases and send it on.”

Many difficulties beset Conrad during the writing of Nostromo, including gout, depression, and financial crisis. In his memoir, Return to Yesterday, Ford stated that his contributions to Nostromo were “usually done when [Conrad] was too ill to write himself and had to catch up with serial publication.” Sixteen pages of Nostromo exist in Ford’s handwriting and Ford points to these as evidence of his claims. Detractors suggest, however, that Ford merely took down Conrad’s dictation. Regardless of whether Ford actually composed part of the novel, it is clear from Conrad's letters to his literary agent that Ford was an important collaborator, stating that Ford “is in possession of my innermost mind (and my notes) on that story” and that Conrad is “confident of his ability to finish it should something unforeseen occur.” The bulk of the novel is unquestionably Conrad’s, but it remains a mystery whether part of it is also Ford’s. 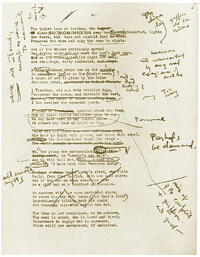 Written in 1922, T. S. Eliot’s The Waste Land remains one of the literature’s most influential modernist poems. After completing the first draft, Eliot commented, “I think it is the best I have ever done.” Yet despite his faith in the poem, Eliot knew his draft lacked coherence and asked friend Ezra Pound to help with the editing. From over 800 lines, Pound pared the poem to 434. Pound did more than trim the poem: he molded it, bringing to light themes that Eliot merely touched on.

Pound even rewrote small sections. He altered the line, “You want to keep him at home, I suppose,” to the more colloquial, “What you get married for if you don’t want to have children?” Pound rejected Eliot’s suggested title, He Do the Police in Different Voices and cut the entire 54-line opening section. Pound’s editorial contributions are the reason The Waste Land begins, “April is the cruellest month” instead of “First we had a couple of feelers down at Tom’s place.” It was through Pound’s work that the genius of The Waste Land became evident. Despite his monumental contributions, his efforts remained largely unknown until the 1970’s after the manuscript with his edits resurfaced. Eliot was forthcoming about Pound’s assistance and the material difference it made to the poem. Indeed, he dedicated the poem to Pound: “il miglior fabbro” or “to the finer craftsman.”