The Scandal Haunting 'The Hound of the Baskervilles'

The Hound of the Baskervilles by Sir Arthur Conan Doyle is one of literature’s most renowned mysteries; Sherlock Holmes is on the case after a ghostly hound stalks, and perhaps kills, Sir Charles Baskerville. Written in 1901, it is now part of school curriculums and popularized in film and television. Yet despite cultural familiarity with the novel, the allegations of adultery, plagiarism, and murder that haunt its creation remain largely unknown. 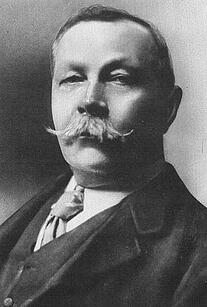 The Hound of the Baskervilles began as a collaboration between Doyle and his friend Bertram Fletcher Robinson, also a professional writer. While the two were on golfing holiday,Robinson regaled Doyle with the tale of a phantom hound that had originated in Dartmoor. Doyle and Robinson became engrossed in the subject and were soon creating their own stories about the animal.

Robinson invited Doyle to his home in Dartmoor where the legend originated. Inspired by the mournful landscape, replete with lonely rock formations and creeping mists, Doyle and Robinson quickly developed what became The Hound of the Baskervilles. During the visit, Doyle wrote to his mother that “Fletcher Robinson came here with me and we are going to do a small book together ‘The Hound of the Baskervilles’—a real creeper.” In the same letter, he mentioned that the book was already half written. Doyle also wrote to his editor offering him the story but stipulating, “I must do it with my friend Robinson and his name must appear with mine.”

After his trip, Doyle added Sherlock Holmes to the story. Just three months later, the first installment of The Hound of the Baskervilles appeared in The Strand Magazine under the sole byline of Arthur Conan Doyle. What happened between Doyle’s visit to Dartmoor and the publication of the story remains uncertain. Instead of a shared byline, Doyle acknowledged Robinson’s contributions with a footnote in the first chapter: “This story owes its inception to my friend, Mr. Fletcher Robinson, who has helped me both in the general plot and in the local details.” Additionally, Doyle paid Robinson £500—the equivalent to about $84,000 today. 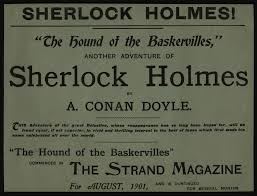 In 1904, Robinson published a series of short stories entitled The Chronicles of Addington Peace. His byline read, “Joint author with Sir Arthur Conan Doyle in his Best Sherlock Holmes Story The Hound of the Baskervilles.” Robinson was quoted posthumously as having told Cambridge undergraduates that he “wrote most of the first installment for The Strand.” There is no record that Doyle objected to the claim. Robinson died prematurely in 1907 at the age of 36, just six years after the publication of The Hound of the Baskervilles.

Doyle later wrote, “The plot and every word of the actual narrative are my own.” Yet statements by Robinson’s coachman, Harry Baskerville, seem to contradict Doyle's assertion. Baskerville, who lent his name to the book, spent time with Doyle and Robinson on their trip to Dartmoor. Just before his death in 1960, Baskerville gave an interview claiming that he had seen Robinson write large sections of the novel. 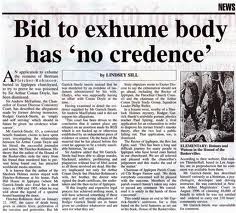 Four decades later, in 2000, worse allegations emerged. After an eleven-year investigation, author Rodger Garrick-Steele claimed that Doyle plagiarized Robinson’s work, had an affair with Robinson’s wife, and finally conspired with her to poison her husband. While the accusations were dubious, they resulted in an investigation and wide media coverage. In 2008, the Exeter Diocese Consistory Court rejected an exhumation request to test Robinson’s remains for poison. With the investigation finally concluded, perhaps The Hound of the Baskervilles will cease haunting Doyle’s legacy.