The Vyne Ring: Fit for a Hobbit?

The second part of Peter Jackson's film adaptation of The Hobbit hit theatres today and already promises to be a holiday box office smash! Indeed, JRR Tolkien's Lord of the Rings series has fascinated both readers and movie enthusiasts for generations. Where did Tolkien get the idea for such a gripping epic?

A large gold ring found by a farmer plowing his field in England in 1789 may have been the inspiration for the classic children's fantasy novel The Hobbit, written by JRR Tolkien and published in 1937. The book was so popular, Tolkien's publisher asked for a sequel, which of course was The Lord of the Rings. The Hobbit is the story of Bilbo Baggins, a friendly homebody who must go on an epic journey that ends in (spoiler!) Bilbo's heroism and coming of age. 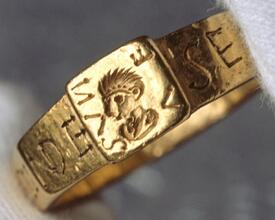 The battles were inspired from Tolkien's time as a soldier in WWI, and the creatures he made up came from his expertise in European philology, and love of mythology and fairy tales. The ring itself was likely based on one found in a field in Silchester and sold to the Chute family, owners of The Vyne, a sixteenth-century Tudor estate, who wrote about the ring in the house's history.  Thirty years later, and 80 miles away in Lydney, Gloucestershire, a lead tablet was found at an excavation of the Temple of Roman God Nodens. It read: “To the god Nodens: Silvianus has lost a ring….among those who bear the name Senicianus to none grant health.”

The centuries-lost ring was an inch in diameter, 12-karat gold, imprinted with the image of Venus, and inscribed 'Senicianus live well in God' in Latin. It had been stolen from the fourth-century British Roman emperor Silvianus, who knew the thief. The emperor cursed the ring and asked the god Nodens to strike him down. It was not until 1929, however, that archaeologist Sir Mortimer Wheeler made the connection between the ring and the tablet. He asked JRR Tolkien, then Rawlinson and Bosworth Professor of Anglo-Saxon at Oxford, to research Nodens. 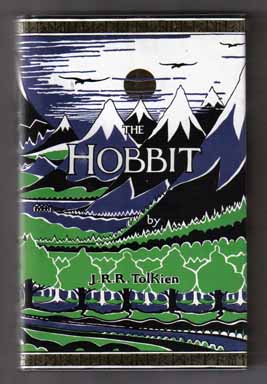 Up until the early 1930's Tolkien had concentrated mostly on his academic career, publishing just a few poems. But he also had made up stories for his children, which featured many different creatures and made-up elven languages. He started to write them down, digging into his memories as a soldier in WWI for battles, as well as taking inspiration from Norse mythology, Germanic and Old English history, Beowulf, and the stories of the Brothers Grimm.

By 1932, Tolkien had a completed manuscript. He gave it to two people to read it: his friend and fellow Inkling CS Lewis, and student Elaine Griffiths, who handed it over to a staff member at a publishing house. And the rest is history!

Alas, the ancient Roman ring was forgotten yet again, left in a corner of the Library at The Vyne, which was bestowed to the National Trust, the British conservation organization, in 1958. Earlier this year The Vyne put the ring on display, along with The Tolkien Society's archive, and a first edition of The Hobbit.