Today we continue our literary road trip through the United States by taking a closer look at my home state, Indiana. For many people, the Midwest is little more than a flyover region and simply considered farm country. It's easy to think of Indiana by the things its most known for: NASCAR, basketball, corn, and perhaps the infamous level of violence located in the Gary, Indiana area. While Indiana is definitely known for those things, it's also a state rich in history. Abraham Lincoln lived a large portion of his childhood in southern Indiana, and President William Henry Harrison and Native American leader Tecumseh led their respective sides in the Battle of Tippecanoe. Indiana is also a beautiful state, home to the Indiana Dunes near Lake Michigan, numerous protected areas of woodlands like the Hoosier National Forest and the Lincoln National and Lincoln State forests, and a rich network of limestone caves. One of America's oldest theme parks, Holiday World, is also in Indiana. Let's take a look some of the best books set in the Hoosier state.

In the world of contemporary young adult fiction, perhaps no name is more well known than John Green. Since the publication of his first novel, Looking for Alaska, in 2016, his work reached remarkable numbers of fans. John Greene is beloved by both young adult readers as well as having crossover appeal with adult readers. Looking for Alaska was recently adapted into a streaming television show and his books Paper Towns and The Fault in Our Stars were adapted into hit movies. Two of Green's novels have taken place in Indianapolis, the state capital: The Fault in Our Stars and 2017's Turtles All the Way Down.

This first quote from Turtles All the Way Down compares the main character to Indianapolis by describing the nature of both the city and the White River, which is a tributary that flows directly into the Wabash.

Indianapolis was built along the river strategically and the city grew up around it. While the quality of the city is perhaps subjective, the comment on the White River is less so. The river isn't particularly wide or deep and while it's used for recreation in other parts of the state, in the areas near Indianapolis, it has been polluted by the city. Still, this quote represents the relationship between the river and Indiana's largest city:

The point of the story is they built the city anyway, you know? You work with what you have. They had this shit river, and they managed to build an okay city around it. Not a great city, maybe. But not bad. You're not the river. You're the city.

The following quote from The Fault in Our Stars details the absurdity that is the weather in the Midwest and the widespread joke about dressing for the current season when living in Indiana:

It was sunny, a rarity for Indiana in April, and everyone at the farmers' market was wearing short sleeves even though the temperature didn't quite justify it. We Hoosiers are excessively optimistic about summer. 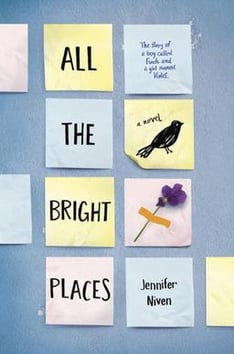 Jennifer Niven's young adult novel All the Bright Places (adapted into film in 2020) is uniquely positioned to represent the state of Indiana. The novel follows its main characters, Violet and Finch, as they are paired up for a school project in which they are to visit and write about local attractions surrounding their Indiana town. While many of the landmarks the characters visit are fictional, they do embody the truth of the rural Midwest and some of the strange, wonderful things that can be found there, proving the state is about more that just basketball and corn.

I think I've got a map in my car that wants to be used, and I think there are places we can go that need to be seen. Maybe no one else will ever visit them and appreciate them or take the time to think they're important, but maybe even the smallest places mean something....Let's go. Let's count for something. Let's get off that ledge.

"I think this is the ugliest place I’ve ever seen. Not just here. The whole state.” I hear my parents telling me not to be negative, which is funny because I’ve always been the happy one. It’s Eleanor who was moody...

He smiles out at the ugly trees and the ugly farmland and the ugly kids as if he can see Oz. As if he can really, truly see the beauty that’s there. In that moment I wish I could see it through his eyes.