Next up on our trip through America by book is the state of Iowa. The Hawkeye state is known for football, farmland, and—in election years—for the caucus. While there are metropolitan centers in Iowa like Des Moines, the Quad Cities area, and Iowa City—the latter of which is known as a literary hub due to the Iowa Writers Workshop, one of the most prestigious writing programs in the country—much of Iowa is rural farmland. While much of Iowa used to be covered in prairies, an emphasis on an agriculture-based economy decimated much of the original landscape. In recent years, there has been an attempt to reclaim some of the lost prairie ground and to provide a safe space for the return of native flora and fauna. Whether city or small town, farmland or prairie, Iowa is a beautiful state well worth visiting, either in person or in books. Let's take a look at some of the best books set in and inspired by Iowa.

A Thousand Acres by Jane Smiley 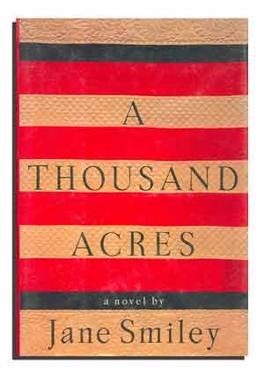 Jane Smiley's Pulitzer Prize winning novel A Thousand Acres is a modern retelling of Shakespeare's King Lear set in the fictional Zebulon County, Iowa. It tells of three sisters whose father decides to split ownership of the farm between them. When one objects, she is cut out of the deal, leading to the eventual revelation of terrible family secrets. The novel—stark, dark, and heartbreaking—offers a close look at life on a farm and what it is like to live at the mercy of the weather and the market. The following quote depicts some of those struggles:

Jess and Pete thought alike -- like city boys, my father would have said, looking for the payoff in a situation rather than the pitfall. Rose and Ty and I played like farmers, looking for pitfalls, holes, drop-offs, something small that will tip the tractor, break it, eat into your time, your crop, the profits that already exist in your mind, and not only as a result of crop projections and long-range forecasts, but also as an ideal that has never been attained, but could be this year.

The narrator, Ginny, has this to say about growing up on the farm:

When I went to first grade and the other children said that their fathers were farmers, I simply didn't believe them. I agreed in order to be polite, but in my heart I knew that those men were impostors, as farmers and as fathers, too. In my youthful estimation, Laurence Cook defined both categories. To really believe that others even existed in either category was to break the First Commandment.

The Bridges of Madison County by Robert James Walker 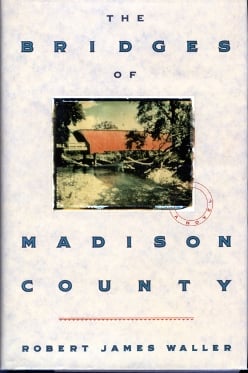 Robert James Walker's 1992 novella, The Bridges of Madison County, details the four day relationship of housewife Francesca Johnson and photographer Robert Kincaid and the impact it had on the rest of their lives.

Much of the novella's text is modeled on Whitman, especially in regard to discussions of life, power, and destiny. While some critics take issue with the prose, the novella was a hit and was later adapted into an acclaimed film featuring Meryl Streep and Robert Redford.

Though short and primarily centered on romance, the novella details life on Francesca's farm and in her town: Friday night football games, the county fair, livestock competitions—all important aspect of rural living. Though Francesca finds her life dull, the beauty Robert sees in it and in her allows her to live her life with dedication and relative peace, even if they live separately.

The following passage is a letter from Robert to Francesca and details the setting in which the two fell in love, from Madison County's famed covered bridges to the open expanse of prairie.

Enclosed are two photographs. One is the shot I took of you in the pasture at sunrise. I hope you like it as much as I do. The other is of Roseman Bridge before I removed your note tacked to it.

I sit here trolling the gray areas of my mind for every detail, every moment, of our time together. I ask myself over and over, “What happened to me in Madison County, Iowa?” And I struggle to bring it together. That’s why I wrote the little piece, “Falling from Dimension Z,” I have enclosed, as a way of trying to sift through my confusion.

I look down the barrel of a lens, and you’re at the end of it. I begin work on an article, and I’m writing about you. I’m not even sure how I got back here from Iowa. Somehow the old truck brought me home, yet I barely remember the miles going by.

A few weeks ago, I felt self-contained, reasonably content. Maybe not profoundly happy, maybe a little lonely, but at least content. All of that has changed.

It’s clear to me now that I have been moving toward you and you toward me for a long time. Though neither of us was aware of the other before we met, there was a kind of mindless certainty humming blithely along beneath our ignorance that ensured we would come together. Like two solitary birds flying the great prairies by celestial reckoning, all of these years and lifetimes we have been moving toward one another.

The road is a strange place. Shuffling along, I looked up and you were there walking across the grass toward my truck on an August day. In retrospect, it seems inevitable—it could not have been any other way—a case of what I call the high probability of the improbable.

So here I am walking around with another person inside of me. Though I think I put it better the day we parted when I said there is a third person we have created from the two of us. And I am stalked now by that other entity.

Somehow, we must see each other again. Any place, anytime. Call me if you ever need anything or simply want to see me. I’ll be there, pronto. Let me know if you can come out here sometime—anytime. I can arrange plane fare, if that’s a problem. I’m off to southeast India next week, but I’ll be back in late October.

P. S., The photo project in Madison County turned out fine. Look for it in NG next year. Or tell me if you want me to send a copy of the issue when it’s published.

Stay tuned! Next month, we'll take a look at some of the amazing books that come from the great state of Kansas!