As one of the thirteen original colonies, Massachusetts has a long history dating back to the very beginnings of America. Massachusetts history begins with Plymouth colony and was the setting for numerous events throughout the making of the nation. The state has been a major player history, academics, and industry throughout the entire existence of the country. While numerous important figures—both historical and literary—hail from Massachusetts, today we continue our bookish journey through the America by taking an in depth look at some of the best quotes from Louisa May Alcott's Little Women, a book that was not only a massive hit at the time of publication, but one that has endured to become considered one of the great classics of American literature. Join us as we take a closer look at this pioneering work of fiction for girls as we continue our Top Books by State Series with Massachusetts:

Little Women by Louisa May Alcott tells the story of the four March sisters growing up in Concord, Massachusetts, during the Civil War. Published in two volumes in 1868, the novel is considered one of the best novels of American literature. It has been adapted for film numerous times, most recently starring Saoirse Ronan, Timothee Chalamet, and Emma Watson. Based loosely on Alcott's own experiences grown up, the novel is notable for focusing on things that, at the time, were considered unworthy of mention in the novels: the home, domesticity, and time of life for girls when childhood and womanhood overlap. Alcott is credited for publishing one of the earliest novels for girls, notable for its treatment of domesticity as something to be valued, while also showing girls through the character of Jo, that it is perfectly acceptable to strive for something different. Alcott wrote the novel at the recommendation of her publisher who saw a growing need for such books and in spite of her own initial disinterest in the novel, it was a commercial success, spawned several sequels, and became the work which she was most known for. It continues to be well-loved today

The following passages detail the beauty of Massachusetts at two times in the the lives of the March sisters. The first is the scene of Meg's wedding, which for the sisters, represented the end of their lives as they currently knew them with all four of them together:

The June roses over the porch were awake bright and early on that morning, rejoicing with all their hearts in the cloudless sunshine, like friendly little neighbors, as they were. Quite flushed with excitement were their ruddy faces, as they swung in the wind, whispering to one another what they had seen, for some peeped in at the dining room windows where the feast was spread, some climbed up to nod and smile at the sisters as they dressed the bride, others waved a welcome to those who came and went on various errands in garden, porch, and hall, and all, from the rosiest full-blown flower to the palest baby bud, offered their tribute of beauty and fragrance to the gentle mistress who had loved and tended them so long.

This second passage details the beauty and happiness of the sister's lives once they are all grown and married (save Beth): 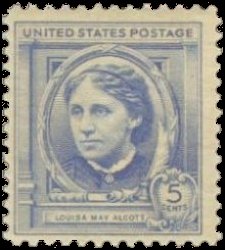 There were a great many holidays at Plumfield, and one of the most delightful was the yearly apple-picking. For then the Marches, Laurences, Brookes and Bhaers turned out in full force and made a day of it. Five years after Jo's wedding, one of these fruitful festivals occurred, a mellow October day, when the air was full of an exhilarating freshness which made the spirits rise and the blood dance healthily in the veins. The old orchard wore its holiday attire. Goldenrod and asters fringed the mossy walls. Grasshoppers skipped briskly in the sere grass, and crickets chirped like fairy pipers at a feast. Squirrels were busy with their small harvesting.

Stay tuned! Next month, we'll take a look at some of the amazing books that come from the great state of Michigan!