Today we continue our journey through the literary United States by taking a look at some passages from books set in Michigan. Michigan is known for its lakes, frigid winters, industry, though the latter has decreased considerably over the past several decades, for which the state is also known. While Michigan is a beautiful state with much to offer, the following passages focus on the particular details, like the difficulties of winter in Michigan or the smell of a Midwest town after the rain:

A Feast of Love by Charles Baxter 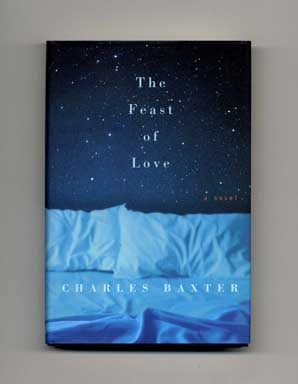 Inspired by A Midsummer Night's Dream, Charles Baxter's National Book Award-nominated novel tells the story of a group of lovers as they move through their lives, connecting with one another and searching for love, whether it be from each other or their own families in a series of vignettes. Consider the following passages about the dreariness that exists in a cold Michigan winter:

In February, the overcast sky isn’t gloomy so much as neutral and vague. It’s a significant factor in the common experience of depression among the locals. The snow crunches under your boots and clings to your trousers, to the cuffs, and once you’re inside, the snow clings to you psyche, and eventually you have to go to the doctor. The past soaks into you in this weather because the present is missing almost entirely.

Because it is the Midwest, no one really glitters because no one has to, it's more of a dull shine, like frequently used silverware.

The Virgin Suicides by Jeffrey Eugenides
Jeffrey Eugenides' novel The Virgin Suicides is set in Grosse Point, Michigan, during the 1970s. It's narrated by a group of boys fascinated by the five daughters of the Lisbon family, whom the idolize, observe, and fail to realize are all planning on ending their lives. This moving, tragedy of a novel focuses on the impact such losses can have on a family and on the psyche of the town. The following passes shows the boys imagining what it is to be a girl in that town through the lens of the Lisbon girls:

We became acquainted with starry skies the girls had gazed at while camping years before, and the boredom of summers traipsing from back yard to front to back again, and even a certain indefinable smell that arose from toilets on rainy nights, which the girls called "sewery." We knew what it felt like to see a boy with his shirt off, and why it made Lux write the name Kevin in purple Magic Marker all over her three-ring binder and even on her bras and panties, and we understood her rage coming home one day to find that Mrs. Lisbon had soaked her things in Clorox, bleaching all the "Kevins" out. We knew the pain of winter wind rushing up your skirt, and the ache of keeping your knees together in class, and how drab and infuriating it was to jump rope while the boys played baseball. We could never understand why the girls cared so much about being mature, or why they felt compelled to compliment each other, but sometimes, after one of us had read a long portion of the diary out loud, we had to fight back the urge to hug one another or to tell each other how pretty we were. We felt the imprisonment of being a girl, the way it made your mind active and dreamy, and how you ended up knowing which colors went together. We knew that the girls were our twins, that we all existed in space like animals with identical skins, and that they knew everything about us though we couldn't fathom them at all. We knew, finally, that the girls were really women in disguise, that they understood love and even death, and that our job was merely to create the noise that seemed to fascinate them.

Stay tuned! Next month, we'll take a look at some of the amazing books that come from the great state of Minnesota!