Few authors are as widely revered as Leo Tolstoy. Many regard him as the quintessential novelist, if not the best writer to ever work with the form. His reputation remains bolstered by an abundance of superlatives, often from most accomplished peers: James Joyce called “How Much Land Does a Man Need?” “the greatest story that the literature of the world knows,” while Virginia Woolf declared him “the greatest of all novelists.” It is settled, then—Tolstoy writes incredible stories. But how does his work stand up to quotation?

Central to Leo Tolstoy’s endurance is his characterization. Like few authors, he was able to create full and lively characters within a space as scant as two chapters, as he does notably in the case of a slain soldier and his family in the novella, Hadji Murad. These are aesthetic strengths that can only be appreciated in the reading of the full book (or at least in extended passages), but indeed, the varied and complex Tolstoy was a man of ideas, and taken in the smallest form, he remains profound. Here is a collection of some of Leo Tolstoy’s finest quotations. 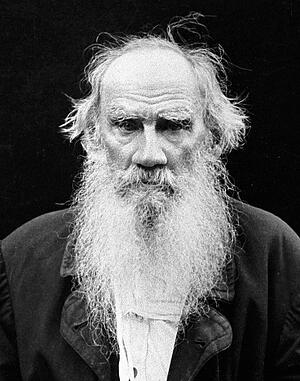 “The happiness of men consists in life. And life is in labor.” and “The vocation of every man and woman is to serve other people.”

What Is To Be Done?  - Tolstoy’s mature work is defined by an urgent moralism that found nothing more important than dutifully serving humankind.

Three Methods Of Reform - This powerful instruction is often attributed in some form to Gandhi, who was famously influenced by the Russian writer.

War and Peace - A very Socratic thought from a man thoroughly interested in the use and nature of wisdom.

“All happy families resemble one another, each unhappy family is unhappy in its own way.”

“If one has no vanity in this life of ours, there is no sufficient reason for living.”

The Kreutzer Sonata - Tolstoy lived a life of moral privation in his youth, and remained a difficult husband and partner for much of his life, and quotations like these reveal that he was not averse to exploring the less noble elements of himself, or humankind.

“To be good and lead a good life means to give to others more than one takes from them.”

The First Step - This one speaks for itself.

“The most difficult subjects can be explained to the most slow-witted man if he has not formed any idea of them already; but the simplest thing cannot be made clear to the most intelligent man if he is firmly persuaded that he knows already, without a shadow of doubt, what is laid before him.”

The Kingdom of God is Within You
Tolstoy was a brave thinker, and as close to original as literature can come. He wondered and examined for much of his life why people avoided thinking for themselves.

“Art is a human activity having for its purpose the transmission to others of the highest and best feelings to which men have risen.” and “A real work of art destroys, in the consciousness of the receiver, the separation between himself and the artist.

—What Is Art? - In this provocative and wise book, Tolstoy rejects the art-for-art’s-sake principle, and advocates for an understanding of art that better allows for it to improve our condition.

“As soon as men live entirely in accord with the law of love natural to their hearts and now revealed to them, which excludes all resistance by violence, and therefore hold aloof from all participation in violence — as soon as this happens, not only will hundreds be unable to enslave millions, but not even millions will be able to enslave a single individual.”

A Letter to a Hindu - This is surely one of the author’s most audacious claims, but the belief it represents—that of nonviolent resistance—would go on to shape the philosophy and conduct of Mahatma Gandhi and Martin Luther King Jr., as well as the more noble components of the arc of modern history.

“Genuine religion is not about speculating about God or the soul or about what happened in the past or will happen in the future; it cares only about one thing—finding out exactly what should or should not be done in this lifetime.”

Path of Life - Leo Tolstoy matured and died an immensely Christian thinker, and thoughts like these illuminate his thoughts and opinions on what constitutes a life well lived.

Surely taking from a body of work so rich and vast as Tolstoy’s I’ve missed some of his great quotations. What did I leave out? What are your favorites? Feel free to let us know in the comments below.