Visiting the Newberry Library in Chicago

We love visiting many different libraries in the United States and across the globe, but one of our favorites might be the Newberry Library in Chicago. With its diverse collections, fantastic exhibits, and emphasis on public programs, we believe the Newberry has something to offer to anyone and everyone. The library’s collection of manuscripts is vast, housing more than 800 Modern Manuscript collections that make up, in total, about 15,000 linear feet. The manuscript collection ranges in time from medieval works to those of the twentieth century. The Newberry has numerous other core collections, including those on local Chicago histories and American Indian and indigenous studies. Yet the reach of the library goes far beyond its research collections. To be sure, the Newberry also hosts exhibits and presentations, all open to the public. What else should you learn about the Newberry Library?

History of the Newberry Library and Its Mission in Chicago When did the Newberry Library open its doors? And what were its aims within the city of Chicago? According to the Newberry’s website*, the library was founded in July 1887 through a donation from Walter L. Newberry, whose will provided for a $2.2 million donation to establish a “free, public library on the north side of the Chicago river.” It opened to the public only two months later and became incorporated under Illinois law in 1892. Since its inception, the Newberry has added a number of important purchases and additional spaces to the library. For example, the Prince Louis-Lucien Bonaparte Collection, the Edward E. Ayer and the John M. Wing Collections were added through purchase and gift following the turn of the twentieth century. In 1982, a “bookstack tower” was added to provide “environmentally secure conditions for the collections . . . and to provide a wider array of public programming.”

The Newberry introduced fellowship programs in the 1940s, which grew tremendously in the 1960s and 1970s. In the latter decade, the library also added four of its notable research centers, including those focused on American History and Culture, American Indian and Indigenous Studies, the History of Cartography, and the Renaissance. Each of the centers has the “goal of stimulating disciplinary and inter-disciplinary scholarship.” Around the same time, semester-long seminars for undergraduate college students began at the Newberry; they continue today.

Programs for the Public at the Newberry In addition to the research centers and the fabulous manuscript collections, the Newberry is also dedicated to providing programs for the public, as we mentioned previously. What are some of these events? The library regularly hosts “Meet the Author” talks, which are free and open to the public. There are also genealogy programs as part of the library’s Adult Education Seminars, which are offered in connection with the library’s “Genealogy and Local History” collection. These programs help adults to “enhance and improve” their skills when it comes to genealogical research.

Each week, the Newberry Colloquium also offers an opportunity for scholars-in-residence, staff members, and fellows to gather to learn more about one another’s research. These events, like many others at the library, are aimed at a non-specialist audience to provide more members of the community with information linked to the collections. And finally, we’d be remiss if we didn’t mention the Newberry Book Fair, which the library’s website describes as “Chicago’s favorite used-book binge,” featuring more than 120,000 books each July that fill approximately 70 different categories.

If you’re just beginning research into a new literary project, some of the manuscript collections may have materials of great interest to you. And if you’re ever in the Chicago area for business or pleasure, we highly recommend browsing the Newberry’s calendar for events of interest. 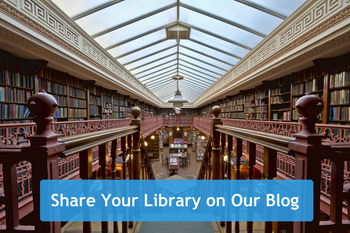