Pulitzer Prize winner, Wallace Stevens, published his first book of poetry when he was forty-four years old. He was awarded two National Book Awards for his poetry, both when he was a septuagenarian. Stevens won the 1955 Pulitzer Prize for Collected Poems, the same year of his death, at age 75. He lived one of those rare lives in which artistic and conventional success were intertwined. He graduated from Harvard Law School and after a career as a lawyer, became an executive at a Connecticut insurance company. He kept the position for the majority of his life, and readily defended his stable occupation. He once remarked to a newspaper reporter, "It gives a man character as a poet to have this daily contact with a job." 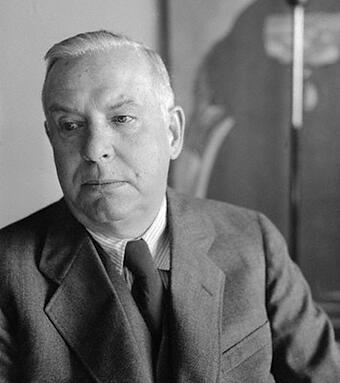 Yet Stevens contradicted himself. In regards to his career-driven life, he said, “I certainly do not exist from nine to six, when I am at the office.” His ambivalence is to be expected. We often envision poets as wandering souls, like Walt Whitman or Lord Byron, not longtime corporate executives.

He never wandered much. A steady flow of commuter trains from Hartford ensured that he could travel easily to New York City, and that satisfied his cosmopolitan longings. Otherwise, he had a fondness for Cuba and the Florida Keys. His trips to the tropics were more than just an escape from the cold; Stevens relished them as sensuous immersions. The air, the weather, the sky all demanded an advanced sensitivity. He sometimes interacted with other writers of his time. Once, in Key West, he got into a fight with Ernest Hemingway, breaking his hand on the Nobel Prize winner's jaw.

Most opinions from his literary peers were more kind. In 1919, Hart Crane said, "There is a man whose work makes most the rest of us quail," in reference to some of Steven's earliest work published in periodicals. While many poets would have their best work behind them by age 50, Stevens impressed everyone with his continued achievement at a time when many artists expect their talents to wane.

Stevens composed some of the most articulate modern poetry on the matter of aging. One of his most respected long poems, “On the Auroras of Autumn,” contemplates the splendid vitality of the Aurora Borealis. He confronts its resplendent display as a reproach to his own diminishing capacities. After acknowledging this cosmic taunting, however, he reaffirms his own capabilities:

This is nothing until in a single man contained,
Nothing until this named thing nameless is
And is destroyed. 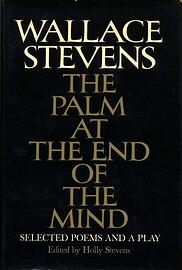 The effulgence of the northern lights is validated only by human perception and articulation, and who better to articulate them than a poet. The narrator may be waning in physical vitality, but his exuberance has always depended on his use of language, that is, his ability to name the nameless. Yet this acknowledgment, the reader discovers, augments the poet’s anxieties rather than lessens them.

Stevens' poetry is challenging, but its near opacity is not accidental. One of Steven's most characteristic artistic doctrines was "the poem must resist the intelligence. Almost successfully." He had a shrewd understanding of what poetry ought to do, which is why a most conspicuous theme of his work is self-referential and metapoetic. As in "On the Auroras of Autumn," the poem often comments on its own power. This long poem can be found collected with his other lengthier works in The Palm at the End of the Mind, an edition compiled by his daughter Holly. When reviewing the collection, scholar Harold Bloom praised the work for "the indispensable presentation of a central American poet, the best and most representative of our time."