Today we celebrate the life of A. A. Milne, beloved author and creator of Winnie-the-Pooh. Although renowned as a novelist and playwright during his own lifetime, his children's stories—inspired by his son, Christopher Robin—have become Milne's enduring legacy. Illustrated by Ernest H. Shepard, his story collections Winnie-the-Pooh (1926) and The House at Pooh Corner (1928)—not to mention his poetry collections When We Were Very Young (1924) and Now We Are Six (1927)—have become indispensable children's classics. 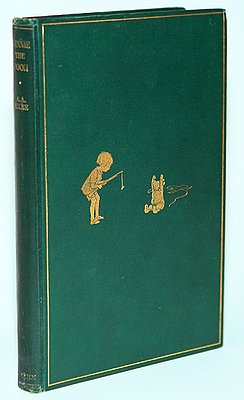 The character Winnie-the-Pooh first diverged into the "classic" version (illustrated by Shepard) and the "Disney" version (illustrated by Stephen Slesinger) when Milne sold the rights to Slesinger in 1930. However, it wasn't until 1961 that Milne's widow sold the rights to Disney. It was in the 1960s that the Disney marketing machine cranked into gear, creating toys, films, television, and books that were inspired by Milne's work but often quite different.

For example, the most widely shared Winnie-the-Pooh quote ("If you live to be a hundred, I want to live to be a hundred minus one day, so I never have to live without you.") was not written by Milne. The same is true for many other oft-cited Winnie-the-Pooh quotes, including, "Promise me you'll always remember: you're braver than you believe, and stronger than you seem, and smarter than you think."

Take a moment to celebrate the true Winnie-the-Pooh with the following quotes written by A. A. Milne: