Sir Arthur Conan Doyle’s name is synonymous with mystery. The creator of Sherlock Holmes, Conan Doyle’s impact on the world of detective and mystery genre remains too great to measure. With an uncanny sense of detail and a keen eye for inimitable characters, Conan Doyle has riveted and delighted millions of readers over the course of the last century. Here are five interesting facts about him.

1.) He played cricket for the Allahakbarries. 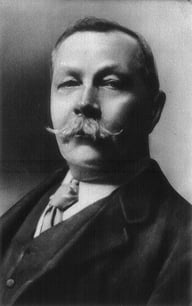 Founded by English writer J.M. Barrie (of Peter Pan fame), the Allahakbarries were an amateur cricket team whose members were some of most significant minds in British letters, from A.A. Milne and G.K. Chesterton to H.G. Wells and Sir Walter Raleigh. Given the breadth of Conan Doyle’s previous cricket experience, it seems likely that he would have been one of the team’s stronger members.

2.) He may have perpetrated one of history’s greatest scientific hoaxes.

Sir Arthur Conan Doyle’s mid-life turn toward spiritualism has been well-documented. We also know of his resultant bitterness when his beliefs weren’t taken seriously. But might he, Richard Milner wonders, have been so bitter toward the scientific establishment that he planted fraudulent evidence of early humans in Piltdown, East Sussex?

The mystery fossils referred to as 'Piltdown Man' puzzled the scientific community for years before being exposed as a hoax. Initially, the Piltdown Man was believed to be an early human—something of a primate ‘missing link'—but later proved to be a fairly modern human cranium paired with the jawbone of an orangutan. According to Richard Milner and Samuel Rosenberg, Conan Doyle had ample motive, training, and resources to perpetrate the hoax and may have even left clues about it in his work.

3.) He once dragged Harry Houdini to a séance.

Few friendships sound so much like a bad sitcom premise. Houdini, the magician with a long track record of skepticism and mystic-debunking, and Conan Doyle, the creator of logical, skeptical Sherlock Holmes and erstwhile believer in the supernatural, met while traveling abroad and formed a fast friendship. The friendship, however, was short lived. Having roped Houdini into a séance, Conan Doyle and his wife claimed to have contacted Houdini’s mother from beyond the grave. The only problem was that their proof, a transcribed letter of her communiqué, was written in English, which Houdini’s mother didn’t speak. Houdini was outraged and publicly denounced the author and his wife.

4.) His mother was a bigger Sherlock Holmes fan than he was. 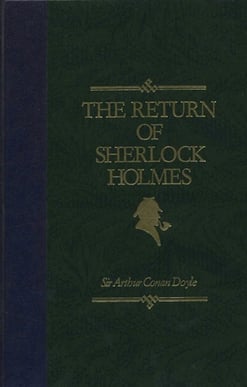 In fact, Conan Doyle soured on his most famous creation after only a handful of stories. Late in life, Conan Doyle sincerely hoped that he would be known in years to come as primarily a spiritualist, rather than a writer. As early as 1891, he was known to have written to his mother expressing a desire to kill off the beloved detective. His mother’s response was a perfect distillation of the broader reading public’s: “You won’t! You can’t! You mustn’t!” Though Conan Doyle would, indeed, kill off Holmes (famously, along with Moriarty, at Switzerland’s Reichenbach Falls), the detective's death was brief. In one of the most famous early instances of the ‘ret-con,’ Conan Doyle revived Holmes for The Hound of the Baskervilles (1902) and The Return of Sherlock Holmes (1903) a few years later, claiming that the notorious detective had actually faked his death.

5.) He investigated a few mysteries of his own.

Most notably, he took on the case of George Edalji, who, thanks to Conan Doyle’s efforts, was exonerated for charges of sending threatening letters and mutilating animals. The case, which was dramatized in, among other places, Julian Barnes’s 2005 novel Arthur and George, cuts to the heart of an often neglected side of Sir Arthur Conan Doyle: the deeply political side. In addition to penning some of English literature’s greatest mystery stories, Conan Doyle was a vocal supporter of British military campaigns in Africa, twice ran for parliament, and volunteered as field doctor in South Africa.