David A. Williamson began collecting Stephen King novels and memorabilia in the 1980s and has amassed a collection that ranks as one of the largest in the world. In 2009, he bought Betts Books and one of his greatest joys is helping other King collectors find that “special” collectible for their own collections. He lives in Fairfield, CT, is married and has three children. He has generously shared his collecting experience and expertise with Books Tell You Why in the following interview. 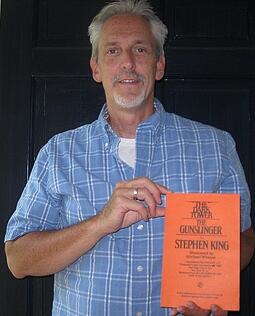 Books Tell You Why: You are a very extensive collector of Stephen King. Could you please describe your collection for our readers?

David: Answer: I began my personal collection of Stephen King items in the early to mid-1980’s, and like most collectors, I started small but the collection quickly grew over the years. I must have over 500 items in my personal collection (95% are books) and over 75% are signed by King himself. My collection encompasses all written and published works by King, but the cornerstone of my collection is the Dark Tower series of novels that King published from 1982-present (nine books so far). There are many different published types of each story: lettered/signed editions, signed/numbered copies, proof copies, artist editions,  first edition trade hardcovers, etc. and I own multiple copies of many of these editions. One of the “Holy Grails” of the King collecting world is owning a complete same-number Dark Tower series set (all 9 volumes signed by King and the artist with the same number). I personally own three of these complete same-number sets and each set is unique from any other ever owned  because my sets have a special sketch drawn in volume 1, The Gunslinger, by artist Michael Whelan.

Books Tell You Why: How do you display your collection?

David: The bulk of my collection is housed in three large bookcases (with shelves that allow books two deep) that have opaque doors that close and lock to keep out sunlight and dust. A smaller part of my collection is located in an environmentally controlled rented storage area that I also use to house the trading inventory of Betts Books LLC. 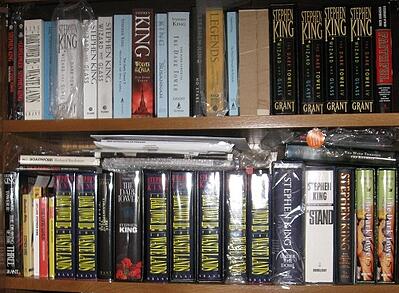 Books Tell You Why: How were you first introduced to Stephen King novels? Was it a case of “love at first sight?”

David: I was vacationing one summer in the early 1980s with my wife (girlfriend then) on Prince Edward Island in Canada. We were camping in a tent in a remote area on the island and I had brought along a paperback copy of Salem’s Lot, Stephen King’s second novel. Reading that story at night, in the remote woods, was just a little bit scary and I remember having a few nightmares about vampires attacking our tent! Well, for me, it was indeed love at first sight and as soon as I finished Salem’s Lot I picked up The Stand and that completely finished me. The Stand is such a powerful story of good versus evil and the character development is so extraordinarily well done that I became “hooked” on King’s writing style.

Books Tell You Why: What makes you so passionate about Stephen King books?

David: Well, for me, and I expect for many other people as well, reading is a chance to escape from the stresses and strains of daily life… it is a way to entertain yourself. Stephen King’s writing style and subject matter is such that when I read a King novel, I completely fall into the book. It is like I am there right beside the characters. There is no other author that can create that same situation for me. King’s stories are so rich and engaging that I am drawn to them like a magnet. I tend to reread my favorite stories and it is like reading them for the first time. It is a truly wonderful experience to read King.

Books Tell You Why: When did you first begin collecting? Did you make any “novice” errors?

David: I began avidly collecting King novels in about 1985, with an initial goal of obtaining first edition copies of all his published novels. And yes, I have made a few “novice” errors along the way. There are different ways (depending on the title and publisher) to identify a true first edition first printing book. Sometimes books are listed as first edition copies but really they are later printings. I have purchased a few books that I thought were first editions but were not. Then, there is Stephen King’s signature. His signature has changed quite dramatically over the last 40 years and, unfortunately, there are quite a few fake signatures on the market. It takes a trained eye to know whether a King signature is real or if it is faked.

Books Tell You Why: What was your most memorable acquisition?

David: Oh my gosh! This is a GREAT story. As I’ve said, I am kind of a Dark Tower book “junkie.” There exists an extremely rare proof copy of The Gunslinger Plume paperback from I believe 1984. To my knowledge, less than 10 copies of this proof were produced. It has an orange cover and is lovingly known as the “Orange Gunslinger Proof” by collectors. I had posted several years ago on a Stephen King website run by collectors (www.thedarktower.org) that I was desperately looking for a copy for my personal collection. One of the members (who is the world’s largest Stephen King collector) happened to own two copies. He contacted Donald Grant Publishing (unbeknownst to me) who then contacted my wife by email. A deal was worked out between my wife and the seller and the Orange Gunslinger Proof was presented to me one Christmas morning as the last gift to be opened. My wife and three children watched as I opened the gift and was left totally speechless with my mouth hanging wide open (no lie). I could not believe my eyes; the one collectible that was at the top of my “want list” was right there in my hands! It was the best Christmas gift I have ever received in my life. An addendum to this story is that I took this proof copy to a Stephen King event/signing at Mason University in September 2011 and got it signed. To my knowledge, it is the only signed copy in the entire world. 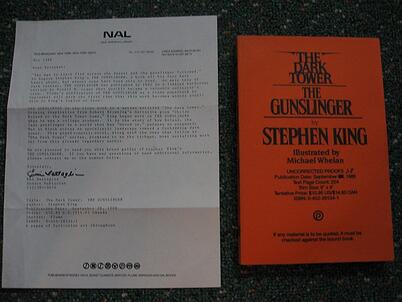 Books Tell You Why: What was your most difficult acquisition? Have you ever chased a particular book?

David: I am still on the “hunt” for yet another Dark Tower Gunslinger proof. This time, it is a Gunslinger UK proof published by Sphere Books in the early 1980s. Like the “Orange Gunslinger Proof,” it is exceedingly rare and there may be as few as 6-8 copies in total. Even the largest King collector in the world does not own a copy. I know a collector in the UK who owns a copy and I have made him a rather generous offer, but I have been turned down. So, this is a book that I am chasing and have been chasing for the last five years. The Sphere Gunslinger proof has become my most difficult acquisition thus far.

Books Tell You Why: Do you read the books in your collection?

David: No, I do not. I always purchase at least one reading copy of Stephen King’s new novels as they are published. After I have read them, the book makes the rounds within my household for other members to read. My collectible copies are scrutinized for condition and authenticity and then placed on a shelf for protection.

Books Tell You Why: What advice would you give to a novice collector?

David: My advice to a new collector would be: (1) do your homework; know exactly what you are buying; (2) have a collecting budget for yourself and try very hard to remain within your budget; (3) if you are in doubt about a purchase, ask a professional like myself for an opinion. My advice is always free and I am more than happy to evaluate a listing, check the authenticity of a signature, or be a sounding board regarding whether a book is priced fairly based on its condition. My final piece of advice is this: collecting is a slippery slope. One must always try to think rationally about a potential purchase. I often see “collecting passion” overcome rationale thought whereby a collector overpays for a particular item because they either want it so badly or they fear they will not ever get the opportunity to find the same item again.

The continuation of David's interview, Collector Spotlight: Enhancing a Collection with Signatures and Artwork, may be found here.