Collector Spotlight: Enhancing a Collection with Signatures and Artwork

Part two of our interview with David A. Williamson, one of the largest Stephen King collectors in the world. In 2009, he bought Betts Books and one of his greatest joys is helping other King collectors find that “special” collectible for their own collections. He lives in Fairfield, CT, is married and has three children. 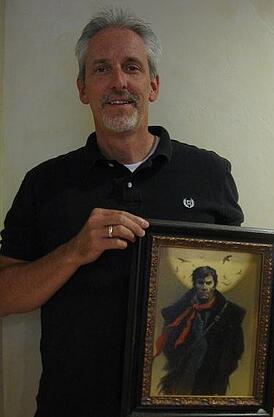 Books Tell You Why: You have become acquainted with a number of Stephen King illustrators. How did those relationships begin?

David: Yes I have. I am pretty well acquainted with seven to eight artists that have illustrated King novels, but the three I am closest to are Michael Whelan, Ned Dameron and Glen Chadbourne. Michael Whelan and I met at the Palavercon Conference that Donald Grant Publishing organized several years ago. I struck up a conversation with Michael’s wife, Audrey, and she introduced me to Michael later that day. As it turns out, we live fairly close to each other (45 minutes apart) and over the years, I have become good friends with Michael and Audrey and have visited them countless times at their home. Michael is an incredible artist and has won more awards than I can count. He was the artist for King’s Firestarter and in the Dark Tower series, book one, The Gunslinger, book seven, The Dark Tower, and Little Sisters of Eluria (a Dark Tower story published outside of the core series). Ned Dameron (Dark Tower book three, The Wastelands) and Glen Chadbourne (artist for too many recent King novels to list) I have never met but I have had extensive correspondence/dealings with them by email and traditional “snail mail.” All three artists, but Michael Whelan in particular, have done original artwork for me.

Books Tell You Why: Could you tell us about the original art they have done for you?

David: Happily! Original art is among the most prized possessions in my collection. In April 2009, I was visiting Michael Whelan and he said that ever since we first met, he has considered me in his artist’s “eye” the very image of Stephen King’s character Father Callahan (from Salem’s Lot and The Dark Tower books). He told me that King had recently asked him to update the images for the major characters in the Dark Tower story, which Steve planned to use on his website in an online game he was creating called “Discordia.” So Michael asked me if I was willing to come to his studio and be a model for him so that he could use my image as the updated Father Callahan character. As you can imagine, I was highly flattered (ok, I was thrilled!) and one day soon thereafter, Michael sketched me out in his studio and took some reference pictures as well. What Michael created was absolutely amazing. Stephen King was given all the artwork to evaluate and given his choice to purchase. He almost purchased the Callahan image, but I think Michael gently steered him away. In the end, I now own the Father Callahan original painting, a separate sketch that Michael did of me plus the original charcoal on paper piece that he did in his studio. 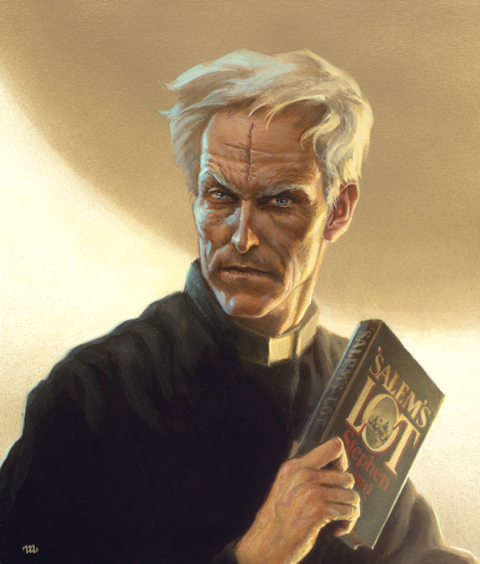 Michael and I both share a passion for the Dark Tower story and Michael, more than any other artist, is considered the be-all and end-all Dark Tower artist. Michael has graciously created original sketches in many of my Dark Tower books and as far as I know, I own more Dark Tower remarques (sketches done by the artist in books) than any other collector in the world. I must have at least 30 in my personal collection.

Becoming the new “face” of Father Callahan has helped open doors for me both as a collector and Caretaker of Betts Books. Most King collectors now know me as Father Callahan and I have even had three people approach me in the street and say to me “aren’t you Father Callahan?” Building upon this foundation, I have asked two of my closer artist friends, Ned Dameron and Glen Chadbourne, if they would be willing to paint me as Father Callahan using their own creative imagery. Both readily agreed and created wonderful pieces that are now part of my personal collection. So now, I have three original Father Callahan pieces of art.

In addition to the art I just described, I own several more original art pieces that were used as illustrations in Stephen King novels, from Michael Whelan, Bernie Wrightson, Ned Dameron, Jill Bauman, Erin Wells, and Glen Chadbourne. 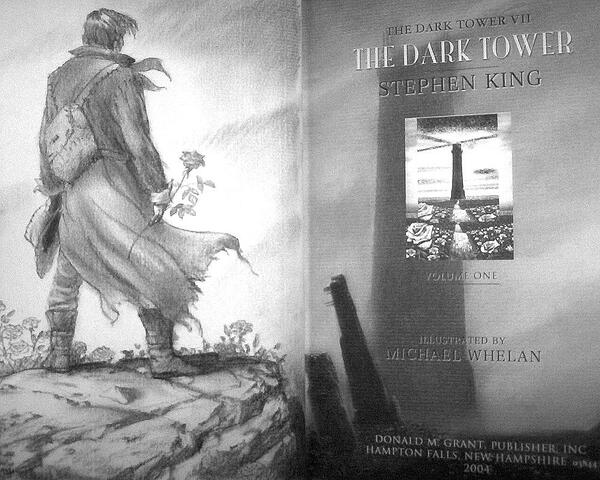 Books Tell You Why: How do you obtain signatures for items in your collection?

David: Getting a Stephen King signature now is particularly difficult. For the last several years, Stephen King has organized signing events through his publisher and sometimes a signing event is attached to a lecture, interview, or charitable event he is doing. Any organized signing with King that is within a five to six hour’s drive from my home I will attend. Most of the time, these signings are strictly for his latest book: those are the only books he will sign. Certain collectors will bring personal copies of other titles in the hopes of catching him on his way entering or exiting the event. Sometimes they get lucky and Stephen will sign a couple copies, but mostly, no. Once every couple of years, King will organize an event where attendees have the opportunity to get any book signed but still there is usually a limit of one or two books. I attended an event last October in Toronto where Stephen was honored at the annual PEN Canada event and he was willing to sign two books of your choice. Your ticket to the event also came with a signed copy of Doctor Sleep, his latest novel at that time. I secured two tickets and took my wife with me, so I got four books of my choice signed.

Books Tell You Why: What was it like meeting Stephen King? 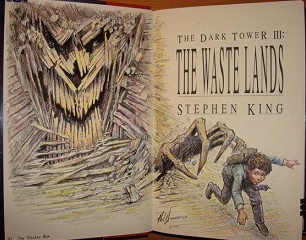 David: Meeting Stephen King (which I’ve done perhaps ten times now) is a little like meeting a famous celebrity. I’m always a little nervous and hope that I don’t say something completely inane when I get a chance to speak. I have only ever met Steve at signing events and you are literally in front of him for less than ten seconds; you only get a chance to say one thing or ask a question. Sometimes he looks up to address you, sometimes not (as he is signing your book in front of him). However, one memorable time for me was at a Mason University event in September 2011. Prior to the event, a limited number of ticket-holders were able to attend a “mixer” that Steve attended as well. As you can imagine, Steve was constantly surrounded by fans hoping to ask a question or get their picture taken with him. I was standing on the other side of the room by myself when he broke away from the pack and walked straight over to where I was standing and asked me “are we having fun yet?” I had about 15 seconds of conversation with him before the pack returned to surround him. I ALWAYS introduce myself to him as the new Caretaker of Betts Books and I think by now he recognizes me on sight. He may not recall my name (understandable given the thousands of people he meets), but I am quite sure he recognizes my face as a friendly one! What I most like about seeing Steve in person is that he is just a “regular guy.” Always in jeans, casual, and laid back, he is personable and easy-going. I admire that he is still a “simple man” despite his incredible success as an author.