Exploring Americana: The English Quaker and the French Privateers

The category of "Americana" is both broad and somewhat difficult to define. It may include, after all, works written outside America, by Americans who have traveled abroad, or the opposite, works by non-Americans who have experienced the country somehow. One delightful piece of Americana falls into the latter category. Some Account of the Life and Gospel Labours of William Reckitt falls squarely into the collecting category of Americana, even though its author is an English Quaker who gets captured by the French (not once but twice, no less)! 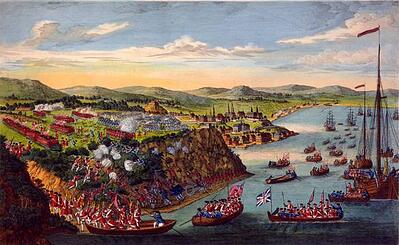 Britain in the Seven Years' War

Born in 1706, William Reckitt was the oldest child of Thomas and Susanna Reckit. Thomas went insane and spent time in the Gainesborough house of corrections. Meanwhile, the Gainesborough Friends supported Susanna and the four Reckitt children. Unfortunately Susanna died young, and the Friends again stepped in. At only nine years old, Reckitt was apprenticed to a weaver who hardly had sufficient resources to care for the boy. He let Reckitt to a farmer during harvest season. It was in the fields that Reckitt said he was visited by a vision and realized he'd been called to ministry.

After his apprenticeship concluded, Reckitt established himself as a weaver in Wainfleet. In 1731, he married Ellin Maw. The two would go on to have nine children, though most would not live to adulthood. It wasn't until Reckitt was about 35 years old that he would finally enter the ministry, appearing at local Quaker meetings. Soon Reckitt was traveling further from home; he ventured to London, Wales, and Ireland, along with the West Country. Yet Reckitt resolved to go even further afield; he felt called to journey to America.

On October 15, 1756, Reckitt boarded the Lydia, bound for Philadelphia. Nine days later, the ship still hadn't left the English Channel--there was simply no wind. Alas, England and France were embroiled in the Seven Years' War at the time, and France had empowered privateers to capture British ships. Such was the fate of the crew and passengers of the Lydia on October 24, 1756. Reckitt said the boarding party was "very sour and fierce...like so many hungry animals." They took the captives first to the coast of Brittany and finally came ashore at Morlaix.

Dressed as he was in his Quaker attire, Reckitt drew immediate attention from the French. One man immediately approached him and said he was sorry Reckitt was there, but that was "the fortune of war." Though the French were quite inquisitive about Reckitt and his morals (or perhaps because of that), he was treated quite well. One woman paid to procure horses for the prisoners, while another, Charles Sermanson, offered to stand bound for Reckitt. Sermanson and his friend John Grace would be instrumental in securing Reckitt's release and return to England in March 1757. In all, Reckitt's imprisonment could have been much longer and significantly more unpleasant than it was.

Almost immediately after returning to England, Reckitt again set his sights on going to America. This time the voyage was more successful, and Reckitt debarked in Philadelphia in September 1757. He traveled extensively throughout the colonies, visiting Quaker meetings along the way. Reckitt even made it to the more far flung meetings in Virginia and Maryland. Reckitt found the meeting in Shrewsbury, New Jersey memorable because it was so large and attracted such a diverse  crowd. And the three-day Salem Yearly Meeting was "an edifyiing time, things being conducted in a degree of the pure wisdom, and the overshadowing of divine power was witnessed by many."

Reckitt resolved to head south, to the West Indies. Again, however, his ship was waylaid by French privateers. Reckitt was once again a prisoner of the French. This time, conditions were much less hospitable. The men were taken to St. Peters, where all twenty of them were crowded into a twelve-foot square cell. Between the stifling heat and the lack of hygiene, conditions were abysmal. Eventually the men were finally taken to the English island of St. Christopher.

Reckitt did not complain overmuch about the conditions, but he was horrified at the treatment of slaves, noting that "the cruelty they used toward [slaves]...exceeded all that I had ever seen before." On several occasions, Reckitt felt compelled to speak out against such inhumane treatment, attributing any regret from his captors to the inspiration of the holy spirit.

Despite two imprisonments at the hands of French privateers, Reckitt did indeed make another voyage to America. But his wife died soon after he'd arrived, so he returned prematurely to England. Very little is 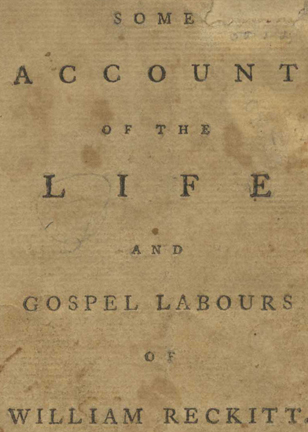 known about this trip. However, Reckitt recorded his impressions of his time in America and his imprisonment in the West Indies in Some Account of the Life and Gospel Labours of William Reckitt. The memoir stands as a window into the religious and political milieu of both Europe and its colonies in the eighteenth century. But it's also a unique look into the microcosm of the Quaker community and mindset.

Meanwhile, for collectors of rare books, a work like Reckitt's illustrates the ways that collecting specializations may overlap. It would be interesting to someone who specializes in the history of religious movements or the institution of slavery in the New World. But Reckitt's work is also a fascinating piece of Americana because it sheds light on the ways that foreigners experienced the country and places American history within the greater context of world history.

Collecting Americana: The Three Layers of Your Collection