Henry Wade's Halcyon: Past Fly Fishing With an Eye to the Future

“There are but few which it has fallen to our lot to read that we could recommend to our readers so sincerely or with so much pleasure.”
– Spectator, February 8, 1861.

On that welcoming note, Halcyon; Or Rod-fishing with Fly, Minnow and Worm to which is added a Short and Easy Method of Dressing Flies, with a Description of the Materials Used by Henry Wade, entered the literary world. 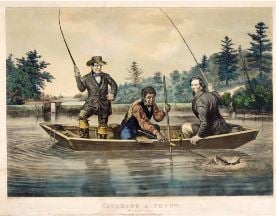 Wade’s book arrived at a historical moment when truly revolutionary changes in the sport, rooted both in science and the Industrial Revolution, were generating a groundswell of public interest and new practices in materials and technique. It was designed to be a comprehensive resource for fly fisherman, covering: characteristics of salmon and trout; selection of rod and reel; producing fly lines from horsehair, silk, and silkworm gut (!); casting, hooking and landing fish; tying flies; and fly designs. For current readers, the fly designs are of priceless value, because Wade effectively bridges the centuries to bring flies – known for provoking strikes well before Lincoln became President – back to life.

While the fly fishing tools and techniques of Wade’s time seem archaic to us, for him the recent past must have appeared equally distant and strange. For example, as a boy Wade would have seen people fly fishing with a short (six to seven foot) rod. It would have had a fixed length of horsehair attached to it (no reel or loose line) and several flies dangling from silkworm gut at the end. Rather than the dramatic rolling fly casts shown on today’s YouTube, Wade’s parents and their contemporaries would simply have reached out over the river or pond and dangled flies on the water. That context makes the inclusion of minnows and worms in the title of Halcyon less jarring. Wade’s book came out just as these three approaches to putting trout or salmon on the dinner table – worms, minnows and artificial flies - were about to part ways forever. But, for the mid-nineteenth century fisherman, they were still not far removed at all.

This book provides fascinating insights into what it was like to live in England just as the historical hinge of the Industrial Revolution was opening. Wade’s discussion of new materials illustrates a gap between the emergence of new materials and the adaptation of manufacturing capabilities. For example, the reader will learn how to tie horsehair into hundred foot lengths, along with the relative advantages and disadvantages of using silk for the joining knots even though within ten years of publication, those lines were commonly purchased.

Even more striking, Wade goes through the (now completely forgotten) art of creating leaders of clear silkworm – providing an illustration (Plate VIII) of how to draw out the gut (after having extracted the two straw-thickness guts from silkworms soaked in vinegar for twelve hours) and stretch it on a board for two hours of drying in the sun. 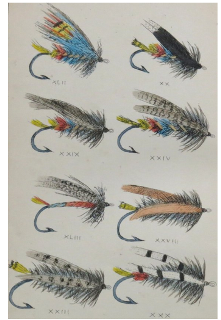 Where the book leaves the realm of time machine-like fascination and enters contemporary value occurs at the end when Wade provides color plates illustrating over 100 types of flies and a descriptive listing of 211 trout and 42 salmon flies. The listing of salmon flies goes so far as to specify flies for contemporary rivers, including the Spey, Beauly, Ness, and Nith.

The author shines in the great care he takes to provide a full description of the fly, in obvious anticipation the reader will very likely rely upon his documentation to re-create and use the fly himself.

Does Wade succeed? The following description from the author himself answers the question for us: “Spey Fly. 2. – Wings, a pair of crest-feathers from the golden pheasant; body, black mohair, black hackle, silver tinsel; tail-tuft, yellow.” Notice how closely the Spey fly tied in the current age matches what Wade was looking at as he wrote the description. 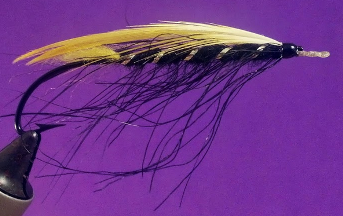 What a gift! Halcyon not only provides a fascinating look into the evolution of our current fly fishing sport, Wade reaches out from the days of the Industrial Revolution with the means by which anglers can cast flies last seen on Scotland rivers over a hundred and fifty years ago. Is it possible for any fly tier worth his or her salt to resist joining the ghosts of Wade’s contemporaries by fly casting with historically accurate designs?