Libraries and Special Collections: The Old Library & The Book of Kells

Today’s featured library is both one of the world’s most beautiful libraries and the permanent location of a very noteworthy book: the Book of Kells. This 1,200 year old collection of Christian Gospels is famous for its intricate and sometimes puzzling illustrations. Distinctly Irish in design and amazingly preserved, the Book of Kells is held and displayed at the Old Library at Trinity College Dublin. 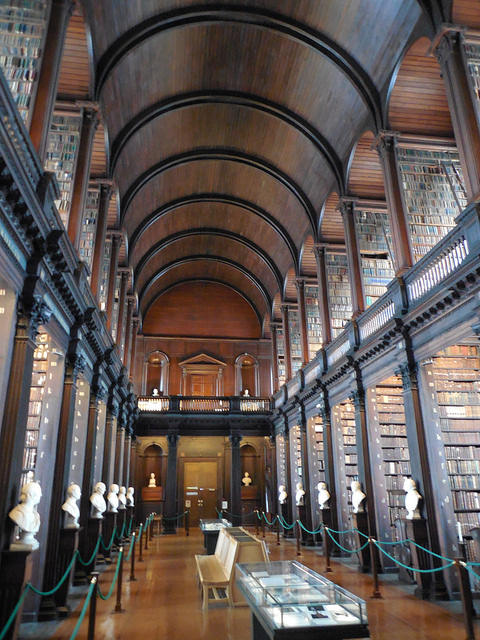 Like many universities of its time, the University of Dublin had some kind of library since its founding in 1592. The Old Library, designed by Thomas Burgh, is the earliest surviving building. Construction took place between 1712 and 1733, though Burgh died a few years before completion. It was a prosperous time for Ireland and the university, and it shows in the craftsmanship of the 300 year old building. The iconic Long Room, filled with dark oak and sunlight, comprises two of the library’s three stories.

Like the Bodleian Library at Oxford, the Old Library became a legal deposit library in 1801, meaning it was entitled to a copy of every book published in the United Kingdom. This allowed the collection to swell to nearly 120,000 volumes by the 1850s, but by then, the Old Library desperately needed repairs. Originally, books were only shelved in the Long Room on the first level with an open gallery above. Architects were able to turn the flat ceiling into the present barrel-vaulted style, allowing for a second level of shelving. Over 200,000 of the collections oldest books are shelved in the Long Room today, which is open for tours and exhibits throughout the year.

Chief among the Old Library’s treasures is the Book of Kells. The Book of Kells is a highly illuminated collection of the Gospels, plus some tables and notes. It was presented to the Old Library in 1661 by Henry Jones, Anglican Bishop of Meath. Much of the Book’s history can only be guessed at, but scholars do agree it was created circa 800 in monasteries on the island of Iona and/or on the mainland at Kells. Tradition links St. Colum Cille, founder and abbot at Iona, with the Book of Kells, but he is no longer considered its creator. The monastery at Kells held the book for most of the medieval period and gave it its name. 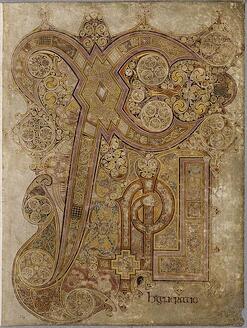 The manuscript contains 340 folios which have been bound in four volumes. At least four different scribes worked to copy the text of the Gospels, though they didn't do a very good job – the text is filled with inaccuracies. As for the illustrations, the scholar Franҫoise Henry identified three artists which she labeled “the goldsmith,” “the illustrator,” and “the portrait painter.” There is still debate on this topic. The illustrations are an exceptional example of insular illumination, a style from post-Roman Great Britain and Ireland. The level of intricacy and detail in the Book of Kells is astonishing, especially pages of portraits or first line embellishments. The Chi Rho page (folio 34r, pictured), for example, begins Matthew’s nativity account with the Greek letters chi and rho taking up most of the page.

We have learned a great deal from studying the Book of Kells, but many things remain a mystery. The manuscript suffered from deterioration (one green color pigment in particular ate through the vellum), people writing in the margins, and improper conservation techniques throughout its many years. Yet the book has survived in miraculous condition and is a marvel to behold for all visitors to the Old Library. And now, thanks to the library’s digitization efforts, anyone can view the Book of Kells for themselves online. The old has once again become new.