One of the oldest and most extensive library collections in the world recently began the process of digitizing its treasures for the world to see. This library is not specifically attached to a university or college, and it's nearly 2,000 years old: the Vatican Apostolic Library in Rome. And it's not just documents of the Catholic Church you'll find there. 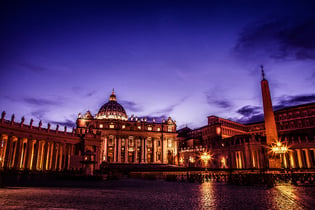 There has been some kind of library to serve Church officials practically since Christianity was approved by Roman Emperor Constantine in the 4th century. There were several periods in the Church’s history where the collection grew, but just as many periods of recovery from natural disaster and plundering. Then in 1451, Pope Nicholas V sought to establish an official library at the Vatican for public use, partially as a way to set up Rome as a center of scholarship. Pope Nicholas didn't live to see the completion of his library, but his successor, Pope Sixtus IV, finished the task in 1475 and named it the Palatine Library. A dedicated and expanded library building was finished a century later, and the Vatican Library still resides there today.

As mentioned above, the library’s collection contains far more than internal documents of the Church. The modern library contains approximately 1.6 million printed books, 8,600 of which are incunabula (books printed before 1501); many exceptionally rare manuscripts; an impressive collection of coins and medals from across the globe; and all manner of fine art. When Pope Nicholas V began to build the library, he specifically aimed to include a wide swath of human writings, and he had scholars translate the Greek classics into Latin. Both the book and art collections go well beyond covering the Christian experience; since the Catholic Church has 1.2 billion members worldwide, the inclusion of cultural and artistic works is also global in scale. 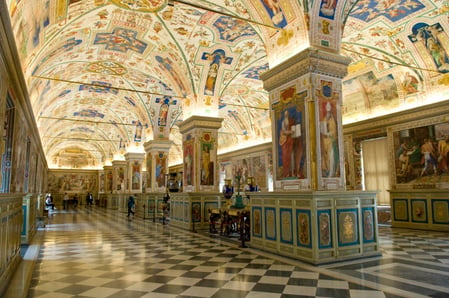 The Sistine Hall of the Vatican Library. Photo courtesy of Wikimedia Commons user russavia and used under Creative Commons 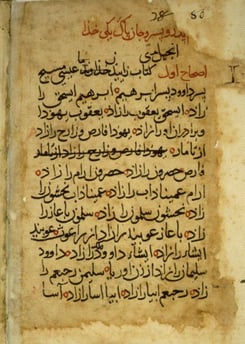 In case you may have been misled by Dan Brown’s adventure thriller books concerning the resources of the Vatican, it should be said that the Vatican Secret Archives are a separate entity and not actually secret at all. Another 150,000 items are held in the archives, mostly documents which pertain directly to the Holy See. Because these documents concerned internal affairs, the archive was closed to outsiders until 1881, when Pope Leo XIII opened it to researchers.

Both the Vatican Library and the Secret Archives are open to anyone who can document a need to research there. As with other research libraries and special collections, this limitation is done to protect the rare and irreplaceable written treasures of history. However, librarians and archivists at the Vatican are attempting to bridge this gap with a major four-year digitization plan that began in 2014. Not all material is eligible for scanning, usually because of brittle condition. A goal of 82,000 digitized manuscripts is set for the project, and they are already well on their way. Several amazing pieces can be found online, with more to come.

Regardless of religion or creed, the Vatican Apostolic Library serves the world as an incredible record of humanity across millennia.