Moshe Prigan is an accomplished book collector, freelance writer, and retired teacher of art and history. He lives in Haifa, Israel but searches globally to make new acquisitions for his collection. While mainly interested in English and Italian volumes of Umberto Eco, he also collects other authors including Alice Munro and Margaret Atwood. Moshe has generously shared his collecting insights with us in the following interview. 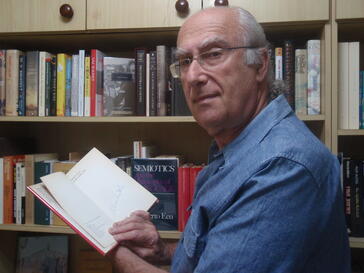 How does one collect the books of a great collector like Umberto Eco?

Books Tell You Why: When did you get interested in collecting books and how did you get started?


Moshe: Five years ago, shortly after my retirement as a high school art and history teacher, my oldest daughter told me that I should try reading Stephen King’s books. Thanks to her, I got hooked on them and found myself delving more and more in his interesting books and life.

One day, I stumbled upon a picture showing a queue of hundreds of people waiting to get Stephen King’s signature in their books. I read that some of them had even travelled from Hong Kong to the United States to get an autographed copy. Man, if they’re doing that for an author, not a movie star or a famous singer, I should join them. This was the trigger that started my book collecting.

My first acquisition was not a book but a memorabilia item: the 1963 Lisbonian (Maine) High School Yearbook. Inside the yearbook is Stephen King as a 16-year-old junior—the school newspaper editor. I doubt if he still owns a copy of the yearbook himself.

Then came the big lightning.

The local newspapers announced that Umberto Eco would be taking part in the 2011 Jerusalem International Book Fair—despite ugly, widespread calls for a cultural boycott in Israel. Remembering the long line of people waiting for Stephen King, I bought the 1980 first print Italian edition of Eco’s famous novel, Il Nome della Rosa, and planned to meet Eco and get it signed. 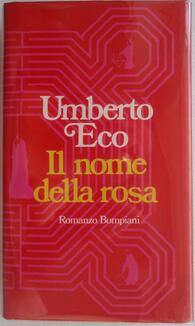 I traveled three hours to Jerusalem to see Umberto Eco. Meeting this literary icon was one of my great, unforgettable experiences. The entire place was crowded. I sat near the entrance at the edge of the first row.

And then he came.

What an impressive presence. Strolling in with his engraved cane, he met my eyes. I must confess that I shivered with excitement. I was looking at one of the most accomplished professors living (go have a look on his amazing curriculum vitae – have you ever seen anything close to it?). So erudite, a true Renaissance man.

He was sitting close to my chair and he signed my book before he was even called up to the stage. In retrospect, I felt sorry that I didn’t help him stand up and climb the two high steps to the stage.

However, when I returned home later that night, I realized how unique my experience was and decided to start collecting ‘him’. Thus, Umberto Eco has become my great literary passion.

Books Tell You Why: Could you describe your book collection? What is its focus?


Moshe: I mainly collect what notable booksellers consider “elusive,” “hard to find,” “rare” books and items related to Eco, Stephen King and other authors like J.M. Coetzee, Margaret Atwood and Alice Munro. It doesn’t matter if it’s a poem or children’s book, comic book or a LP vinyl record. Everything related to the author counts! Like the Stephen King 1963 High School Yearbook or his highly collectible book The Shining – signed and dated year of publication (1977). 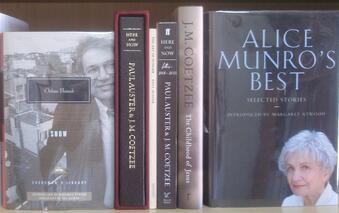 You should have seen and heard Margaret Atwood’s reaction when she saw my Orhan Pamuk’s Snow (signed by the Nobel Prize winner) for which she wrote the introduction. “How did you get it?” she exclaimed as she signed her introduction. The book is quite rare, especially now with the signatures of two notable literary figures. Also the very rare Alice Munro’s Best Selected Stories signed by both Munro and Atwood.

Books Tell You Why: What was your most memorable acquisition?


Moshe: That’s a tough question. So many were memorable acquisitions, but let’s see.

Umberto Eco is a great fan of comic books. He penned introductions for many of them and even took a role as one of their protagonists in Dylan Dog - Lassù qualcuno ci chiama , No. 136 (Somebody Up There Is Calling Us) and in Dago Umberto,written by Uchronia Comics in homage to Eco (limited edition of 500 copies.)

Dylan Dog is an Italian comic book series created by Tiziano Sclavi, published in many countries. There was a forum discussion on the net about his comics. It was mentioned there that one book of the series, Dylan Dog - Indocili Sentiment, i Arcane Paure (Wild Sentiments and Mysterious Fears) is considered the rarest and most difficult to find. In it is a long interview with Umberto Eco. 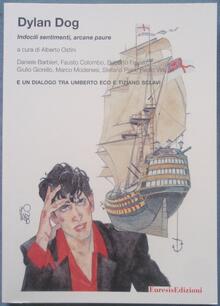 After searching for two long years, I found it in one magic moment. Had I not stumbled on the forum discussion I would have missed important information.

However, I think the next story conveys the full meaning of chasing and buying a special item.

This item is not a book. It’s a CD album: Gli Anni Zero (2008)with 17 songs written by Italian intellectuals, including Umberto Eco, who wrote Facile, Facile (Easy, Easy). Italian singer and actress, Otavia Fusco, performed the songs and organized the project.

The moment I read about Eco’s collaboration, I started looking for this unique set (a CD and calendar) but I quickly realized that it wouldn’t be facile to find it. I contacted many music stores specializing in rare items but they hadn’t even heard of it.

I decided to call the manager of the performance. He told me that this set wasn’t for public circulation.  The 3,000 sets were only sold to attendees of a special performance in Genoa where half of the proceeds were donated for the Foundation of Cystic Fibrosis Research.

He gave me the singer’s address. I called her and she was glad to give me a set. She wrote me a dedication ending with SHALOM – “Hello” in Hebrew.

I was in seventh heaven.

Books Tell You Why: What is your favorite book in your collection? What makes it special?

This book is from Eco’s early academic career, when he was a 27-year-old assistant lecturer in aesthetics at the University of Turin. He wrote it in 1959, five years after his first doctoral work (which I am currently trying to obtain).

When I presented him this book for signing,his eyebrows rose up a bit and he chuckled, saying:

“It has been years and years since I had seen or thought of this book.”

For me, such a declaration from Umberto Eco makes the book special.

From my non-Eco collection, I would say that Tracy Chevalier’s Girl with a Pearl Earring is special too. I met her in Jerusalem for a literary event in 2012. When I handed her the book, she immediately looked at the back of the dust jacket. I knew why. She was looking for the spelling error “Pearl Earing.” She asked me, “Where did you get it? It’s unique.”

“All right. Anything else?”

“Yes. Thank you so much!” (I was on the verge of bursting into laughter since the encounter seemed so funny).

It was a half-truth, however. I also wanted her to add a line from the book but I felt a bit ashamed. Anyhow, I was holding the one and only copy in the world inscribed with “Jerusalem.”

Finally, Margaret Atwood surprised me when I met her and she said that she did not write the first paragraph of her Oratorio for Sasquatch, Man and Two Androids, a Poem for Voices—a relatively  unknown piece which was published in a very small quantity by the Canadian Broadcasting Association. She marked the paragraph with a line and wrote: “I didn’t write this,” and signed. This booklet with the publisher’s error and her inscription makes it quite special.

Books Tell You Why: Are you part of a community of collectors? If so, how does it influence your collecting?


Moshe: I’m a member of TheDarkTower.org – the exclusive site, the bible for everything related to Stephen King. You can learn so much there about King’s books and the authenticity of King’s signatures, since many on eBay try to sell fake signed copies of his work.

The information I find on that site also helps me decide what to collect. The forum members are like a family, happy to give advice and help with any question I ask. Unfortunately, I haven’t found a specific forum for Eco fans—a forum of Eco fans would be a great idea.

The continuation of Moshe's interview, Tips for Collecting Rare Books and First Editions, may be found here.