Fly fishing is an ancient sport. One of its first mentions was made by Claudius Aelainus in the second century as he described fishermen on the Astraeous River: "They fasten red wool..round a hook, and fit on to the wool two feathers which grow under a cock's wattles...the fish, attracted and maddened by the color, comes straight at it.." In Fly Fishing in Salt Water, Lefty Kreh takes a detailed and engaging look at how this ancient sport can be adapted to the challenges of the ocean. The book is self-described as the saltwater fly fisherman's bible and his treatment of the subject does not disappoint.

In Fly Fishing in Salt Water, Lefty Kreh begins by making the point that the challenges of applying a fishing technique designed for freshwater streams to the sea are daunting. Saltwater fish are often larger and more powerful than those in freshwater. Rods must not only be able to cast longer (90+ feet) but also lift fish several feet to the boat. Landing the fish is physically tasking. In fact, fighting saltwater fish can take thirty minutes to over two hours. Schools of fish must be found and stalked. And, casting accurately despite constant wind gusts is a feat. Lefty's book gives the reader a thorough description of these challenges and provides both information and the tactics needed to meet them.

For example, Lefty points out that freshwater fly fisherman know that proper water temperature and clarity are essential for good fishing conditions. In saltwater, however, tides are everything. While they do affect water temperature and clarity, their most important impact is on the movement of baitfish and the entire foodchain of predators that follow them, including the fish being sought. Saltwater fisherman must understand both tides and the way winds can influence them, and Lefty walks the reader through interpretation of tide tables and where to find additional sources of good information.

In addition to differences in reading saltwater versus fresh water, fly fisherman must also appreciate—and respond to—the different demands saltwater fly fishing puts on tackle. As Lefty explains, the saltwater fly fisherman faces a perpetual conundrum: Casting distances and wind challenges call for heavier lines, but wary fish in shallow areas are easily frightened when heavy lines hit the water. He spends an entire chapter on the lines and the tackle options and tactics available to address this situation. Yet another chapter is devoted to just the knots and leaders needed to deliver the fly correctly to the fish.

Perhaps the heart of the book is Lefty's narrative on saltwater fly casting and the capabilities required for success required by both transitioning freshwater fly fishermen and those new to the sport entirely. He clearly establishes why and how fly fisherman in saltwater face the demands of gusty, changing winds; larger flies; more intricate materials on the flies casting with a shock-leader tippet (twelve inches of heavy wire or monofilament, placed at the end of the leader, preventing sharp teeth from biting through line); and the necessity of learning to cast long distances. 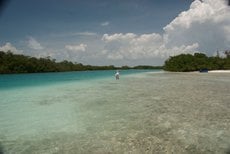 Lefty makes it quite clear that learning to cast 100 feet — a distance rarely, if ever encountered in fresh water fishing — is necessary for success in its saltwater counterpart. In fact, distance casting is so importance to Lefty that he maintains the most important quality of the fly itself is its casting attributes. This is a far cry from the fresh water fly fisherman's preoccupation with having the fly mimic actual insects.

From casting, the book goes on to address actual tactics of fishing with flies in saltwater: how to stalk either individual fish or schools of fish; techniques for setting up either a wading position or boat position relative to the fish; and the most effective manner of presenting the fly. These tactics are broken out for specific gamefish: bonefish; tarpon; striped bass; bluefish; salmon; permit; snook; sharks; cobia; tuna and billfish.

When this first edition of Fly Fishing in Salt Water was printed in 1986, the New York Times described it as the "best book on the subject." Almost thirty years later, the praise still rings true.