Simone-Lucie-Ernestine-Marie de Beauvoir is remembered as an eminent French philosopher, writer, and feminist. She is best known for her books, She Came to Stay (1943), The Second Sex (1949), and The Mandarins (1954). Beauvoir is also famous for her lifelong relationship with legendary dramatist Jean-Paul Sartre. 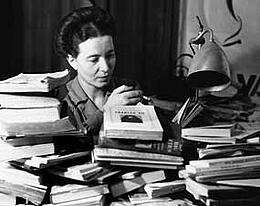 Born January 9, 1908 in Paris to a struggling middle-class family, Beauvoir was intellectually curious from a young age. In her memoirs, Beauvoir wrote, “.my father's individualism and pagan ethical standards were in complete contrast to the rigidly moral conventionalism of my mother's teaching. This disequilibrium, which made my life a kind of endless disputation, is the main reason why I became an intellectual.”

Beauvoir excelled in school. In 1925, she passed baccalaureate examinations in philosophy and mathematics. She studied mathematics at the Institut Catholique and literature at the Institut Sainte-Marie. She then attended the Sorbonne, studying philosophy. She unofficially attended classes at the École Normale Supérieure to prepare for a highly competitive postgraduate exam. It was during this time that she met Sartre, who narrowly won first place in the exam just ahead of Beauvoir. Beauvoir, just 21 years old, was the youngest person ever to pass the exam and became the youngest philosophy professor in France.

Beauvoir and Sartre became a couple in 1929. Sartre proposed, but Beauvoir felt strongly that they should not institutionalize their relationship. Instead, they began an open relationship that set no restrictions on the other’s behavior. They shared and developed all their work together but lived apart and were honest about their affairs with other people.  While their choice not to marry was based on ideals, it may have had pecuniary origins as well.  Beauvoir lost her dowry as an adolescent due to her family’s financial difficulties. This was devastating to Beauvoir’s father, who felt himself a failure for his daughter’s consequent inability to marry. Beauvoir herself stated, “Marriage was impossible. I had no dowry.”

Beauvoir lost her teaching license in 1943 after accusations that she had seduced one of her students. She began writing as a result and published her first novel, She Came to Stay, the same year. The novel, set just before World War II, is an account of a love triangle between a couple and their young friend. Based on the real relationships among Beauvoir, Sartre, Olga Kosakiewicz, and Wanda Kosakiewicz, the existentialist novel also explores the ideas of freedom and angst.

Beauvoir is most famous for her book The Second Sex. Beauvoir argues, “one is not born, but rather becomes, a woman.” Rejecting the premise that men and women are either equal or different, she contends that women are equal to men but that the difference between the sexes is real. The goal, she states, is the mutual recognition of each sex as free and other. The book was first published in abridged form with an inadequate translation by Howard Parshley. Publisher Alfred A Knopf refused all offers for improved translations, and it was not until 2009 that a second, re-translated version was published in the United States including a third of the work that had previously been cut.

Her novel The Mandarins won France’s highest literary prize, the Prix Goncourt. Beauvoir also wrote many popular travel diaries as well as several volumes of short stories. After Sartre’s death in 1980, Beauvoir wrote La Cérémonie Des Adieux (A Farewell to Sartre), a painful account of Sartre's last year. Some were offended by the book, believing it a cold tribute to Sartre after a lifetime spent as his friend and lover. Despite this controversy, Beauvoir was buried next to Sartre in the Cimetière du Montparnasse in Paris after her death from pneumonia in 1986.