Stop for a moment and think about how much society runs on the availability of paper: book publishing, printed money, legally binding documents, etc. When the American southern states seceded from the Union in 1860, they found themselves in need of both an organized government and the paper to make it run. Publishing in the Confederacy was going to require creativity.

Up until that point in American history, most published books were printed in New York, Cincinnati, and Philadelphia. The Union immediately cut off trade with confederate states, so it was up to southern printers to take up the banner. All materials printed in the Confederacy during the Civil War are known as Confederate Imprints, and experts place total production numbers between only 7,000 and 10,000, making them a rare item for collecting.

At the beginning of the war, it was mostly government documents (for the confederate government and individual states) and political pamphlets coming off of the printers. The Confederate States of America were trying to establish themselves as a nation and stir up patriotism for the war effort. However, it wasn’t just a new president and a new congress that needed printed documents; the new Department of the Treasury needed unique currency and the postal service needed new stamps (examples of which can be found online at the Boston Athenaeum). The Confederacy also required paper for all legal and financial transactions, including that great staple of wartime, government bonds.

A surprising amount of sheet music was produced by Confederate printers, probably because music was both a way to stir hearts for love of country and a means of leisurely escape. Keeping up soldier morale was essential during the war, but so was maintaining domestic life. Educational texts were needed to keep teaching children, though it took a while for presses in Texas, North Carolina, Virginia, and Alabama to produce their own; schools had to find copies of northern textbooks in the meantime.

While there wasn’t a great deal of southern literature written during the war, creative writers still managed to find their voice amongst the chaos. Poetry was popular but so filled with patriotism that its artistic quality is not considered very great today. The war actually served as a wake-up call to southern writers to find the niche of Southern Literature, which would come to fruition over the following decades. Fiction did find its place, however; British literature found an audience, and a new translation of Victor Hugo’s Les Miserables was oddly popular during the Civil War.

As the war dragged on, supplies for printing (like everything else) became more and more scarce. The Union had placed trade bans and European blockades on the Confederacy, and Union troops usually destroyed manufacturing plants on their marches. Printers became desperate, using wallpaper as paper and binding for books. Ink was also hard to come by. Besides the raw materials, there was a shortage in personnel to run the presses as all available men were sent to the battlefield. Communication and distribution channels were sluggish and unreliable, so the manufacture of Confederate imprints ended before the Confederacy did. 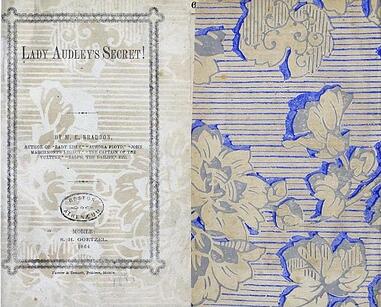 An example of wallpaper as printing material, as well as a rare work of fiction. Used with permission from the Boston Athenaeum Digital Collections.

So few of these imprints survived that a few comprehensive bibliographies account for the majority of materials printed in the south during the Civil War. Most are kept in museums and special library collections, but you never know what may be hiding in the family attic.