A Brief History of the Library of Congress

The Library of Congress has been around nearly as long as the United States of America. Approve by President John Adams in 1800, the goal of the library was to solve a problem when the government moved from Philadelphia to Washington D.C. Namely, in Philadelphia, congressmen had access to the well-stocked Free Library of Philadelphia. Their concern was that the burgeoning new capital was still under development, and in D.C., members of Congress would lack access to books outside their own personal collection. The Act of Congress allocated $5,000 to stock the library, which today would be roughly $92,000. The books assembled, nearly 750 of them, were inspired by the classical education most of the founding fathers possessed and therefore included papers on theology, philosophy, government, history, and languages. 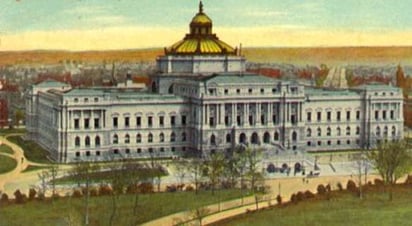 The Early Years: Thomas Jefferson's Impact on the Library of Congress

Though the Act was passed by President Adams, it was President Thomas Jefferson who had the most impact on the formative years of the library. One of Jefferson's first acts in relation to the library was to make the Librarian of Congress a government-appointed position. The first person appointed this role was John J. Beckley, who received $2.00 a day in payment, which today would equal about $36.00. Beckley and subsequent librarians also served as clerk for the House of Representatives.

Jefferson's biggest influence on the library happened after his presidency, however. The Library of Congress was burned during England's attack on the city during the War of 1812. To help rebuild the library, the government purchased Jefferson's private collection of nearly 7,000 books after Jefferson said he was willing to sell.

The Civil War Period and Beyond

Having only just recovered from its 1814 fire, the library caught fire again during the Civil War. Nearly all of Jefferson's collection and many of the books acquired since the War of 1812 were lost. Up until this time, curating and expanding the collection had been done not necessarily haphazardly, but with perhaps less impetus toward preserving a comprehensive collection of books for future generations. This changed after the Civil War, as both the government and population expanded. Due in large part to efforts by librarian Ainsworth Rand Spofford, Congress began viewing the library as a national library. 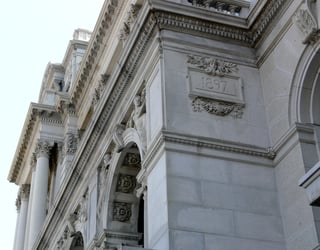 What came next was a period of rapid expansion and growth for both the library proper and the collection itself. The library took a much more comprehensive approach toward the collection, making it a priority to house American publications. Copyright registrations took up location there, and by 1900, another building had been constructed to accommodate the much increased collection. It also had become the primary location for legislative documents and laws for the United States.

In the 20th century, the library continued to increase the amount of services and texts that it offered to the public. The Library of Congress continued to maintain its commitment to nationalism by housing the Declaration of Independence as well as the Constitution, though these documents were relocated to Fort Knox during World War II as a precaution.

Since then, another building was constructed, the two older existing buildings were renovated and modernized, and in 2007 a new National Audio-Visual Conservation Center was constructed to continue the library's efforts to stay on top of technology and to provide a free and complete collection to the American public.

In 2016, Carla Hayden was named the most recent librarian of Congress and is the first woman as well as the first African American to hold the position. As of 2016, the library has had in stock 164,403,119 items including books, magazines, newspapers, maps, photographs, sheet music, audio recordings, videos, drawings, and more.