Five Early Stories of The Lord of the Rings

As literature endures down through the generations, the details surrounding a book’s birth into the reading world are often forgotten. Even with the immense popularity of J.R.R. Tolkien’s work today, some of these details remain buried in letters and essays. Here are five such interesting tidbits about the early years of The Lord of the Rings that you might not know. 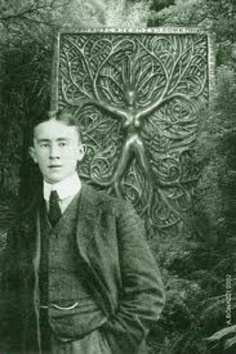 1.)  Although The Lord of the Rings is now considered one of the most-loved books in the world, Tolkien’s work thoroughly split the professional critics. Some marveled at its scope and depth; others found it utterly lacking in relatability. Chief among the negative critics was Edmund Wilson, who penned a hilariously-titled opinion piece, “Oo, Those Awful Orcs!” in 1956. Wilson mainly objected to the puffed-up reputation enjoyed by the books among literary circles, insisting that any adult who enjoys them must have “a lifelong appetite for juvenile trash.”

2.)  Houghton Mifflin Company of Boston brought the first American editions of the three volumes out just months after the UK releases, but ten years later in 1965, Ace Books took advantage of a copyright loophole and printed 150,000 unauthorized paperback copies of each volume. Originally, Houghton Mifflin had imported the sheets from Britain to bind in the US, and they still read “Printed in Great Britain.” This meant that the text was technically in the public domain for Americans. Ace Books was taken to task by Tolkien and his publishers; they agreed to stop printing the book and to pay royalties. Thankfully, Tolkien had already been working on a new edition of The Lord of the Rings, which allowed him to reassert his copyright. 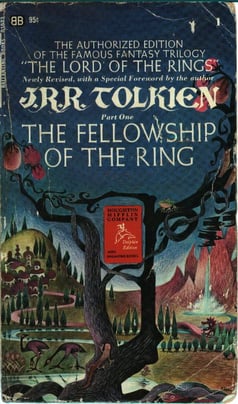 3.)  That 1965 authorized paperback edition was published by Ballentine Books. All three volumes bore the statement, “This paperback edition, and no other, has been published with my consent and cooperation. Those who approve of courtesy (at least) to living authors will purchase it, and no other.” The cover design did not, however, meet with Tolkien’s prior consent. A gnarled tree with large, pink bulbs takes up the foreground, with various animals like a lion, a frog, a salamander, and emu-like birds populating the background of a village (not unlike Hobbiton) and a waterfall. When Tolkien spoke to a woman at Ballentine about the horrendous cover, she replied, “But the man hadn’t TIME to read the book,” and stated that the pink bulbs were “meant to suggest a Christmas tree.”

4.)  Sales of Tolkien’s books kept up steadily in the UK through the 1960s but skyrocketed in the US. College and university students couldn’t get enough of Frodo, Gandalf, and Gollum. Much to Tolkien’s chagrin, his most devoted readers were often pot-smoking hippies who called his home in Oxford in the middle of the night, forgetting the time difference. While he didn’t seem to mind attracting this audience, he remained firm that his work had greater significance.

5.)  Despite Tolkien’s constant confirmation that The Lord of the Rings was not a work of allegory, readers went ahead and speculated anyway. A popular belief, which now seems dated and misguided, held that Mordor stood in for the Soviet Union and the One Ring was a nuclear fission bomb. Future generations can be grateful that that particular reading has fallen out of favor.