Uncle Tom's Cabin: The Book That Changed Everything Forever

We like to believe that every book makes an impact and every story has meaning and relevance. In the case of Uncle Tom’s Cabin, however, the truth of that belief is overwhelming and iconic. Uncle Tom’s Cabin literally changed the way that people thought about slavery, impacted a generation, and opened eyes and hearts—specifically regarding race—in a way that no other book has. The history of the publication and reception of this book is almost as fascinating as the story itself and, like the book, is worth revisiting again, and again, and again. Published in 1852, during a time in America when slavery of African Americans was still an accepted and consistent practice, Harriet Beecher Stowe’s novel became a best-seller. The story pulled at the heartstrings of readers and showed African Americans as human beings when many had previously thought of them as property or cattle. This collective cultural realization activated the abolition movement, and with it the willingness to participate in the Civil War. As Lincoln said, upon meeting Stowe, “So this is the little lady who made this big war.”

The novel tells the story of Eliza, Tom, and Harry, all slaves and all yearning to be free. Eliza is the mother of Harry, who is just four years old. Tom is older and has a wife and children to consider, but when the three of them are sold to pay the family’s debts, things take a turn. Eliza runs, carrying her child across an icy river to eventual freedom and reunites with her husband. Tom, however, continues to remain with his master, but is beaten to death for not revealing Eliza’s location and refuses to deny God. They are supported by a cast of other characters, and within the story, death, sacrifice, love, innocence, and true humanity shine through. As a result, it is a compelling read and inspires undeniable empathy for characters not seen before in popular literature as anything other than caricatures of feeble minded, simple, and happy field hands.

Stowe based her work on true life interactions she had with current, former, and runaway slaves during her lifetime. Living just across the Ohio River in Cincinnati, Stowe encountered slavery in Kentucky—practically her own back yard—as a young wife and mother. One of the main themes in Uncle Tom’s Cabin is that of mothers and children, a sentiment easily understood by child-bearing women and families in general. In 1849, Stowe’s own baby, Samuel Charles, contracted cholera and died. Stowe, heartbroken, realized that in slavery mothers lose children to the institution—as well as violence and neglect on the part of the practice—and she desired to protect both the children born into slavery as well as the mothers who bore them.

As a granddaughter of a woman who employed former slaves, the idea of slavery was nothing new, but as an adult, interacting regularly with former slaves who had just recently escaped, Stowe was moved to tell their stories.

Not wanting to debate such a divisive issue, but rather to evoke the same feelings she had in others simply by creating a human face to a group thought to be less than human, she set out to write her way into hearts and minds. This was all inspired and put into motion following the Compromise of 1850, which enforced the Fugitive Slave Law, essentially requiring free states to cooperate with slave hunters and therefore be part of the slavery system, one that Stowe found abhorrent and vile. Her personal relationships and interactions with those fleeing from slavery inspired her to take action.

Uncle Tom’s Cabin was introduced to the world as a piece of fiction in installments, published in the National Era, an abolitionist publication, in 1851. Her writings were based on accounts of slaves she or her family spoke with personally, and they were also inspired by accounts Stowe read about in other abolitionist publications, including that of former slave Josiah Henson who was the direct inspiration for Uncle Tom. The story was so popular that the circulation of the National Era grew from 17,000 to 28,000 while Uncle Tom’s Cabin was being serialized. By 1852, the serial novel had become a bound book and a best seller, translated in over 60 languages.

The North had always been anti-slavery, but with the passing of the Compromise of 1850 coupled with the sweeping human impact of the story of a young mother forced to risk her life and her child’s life to escape the evils of slavery, citizens no longer felt that there was any alternative to conflict with the South. Stowe’s own son, Frederick William Stowe, enlisted and was horribly injured when he was hit by a shell at Gettysburg. 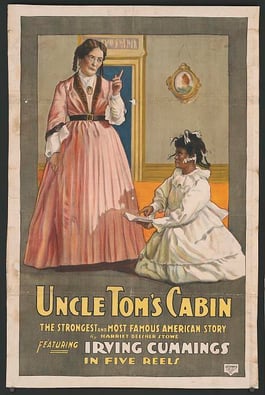 Stowe embraced her part in the Civil War and emancipation of the slaves and continued her work. In 1853, she penned A Key to Uncle Tom’s Cabin, an essay in book form addressing her critics, and she wrote another abolitionist tome in 1856, “Dred, A Tale of the Great Dismal Swamp.”

The Uncle Tom narrative, the title, and the characters all continue to be part of the greater culture. Though the figure of “Uncle Tom” has become synonymous with a “step and fetch it” character, the original character was a true martyr. The change in interpretations of his action can be attributed to the lack of patience the modern audience has with passivity attached to heroic figures suffering oppression.

For 75 years, the theatrical version of the book played in England and America, and a play within a play “The Small Cabin of Uncle Thomas” is part of the Rogers and Hammerstein's The King and I.

There is something untimely and deeply moving about a mother protecting her child, and something universal about the desire to see humanity and to understand one another. It was this need, this attachment of empathy where there had been complacency, that created both war and freedom, thanks to the little woman who wrote the long book that started a great war.