T.S. Eliot authored some of the most recognizable poems of the 20th century. He was a major player in the modernist movement, and his "The Love Song of J. Alfred Prufrock" is considered one of the best of the genre. Eliot won the Nobel Prize in Literature in 1948, and the selection committee praised him for "his outstanding, [pioneering] contribution to present-day poetry." Many other writers owe a debt of gratitude to T.S. Eliot for paving the way, and as Britannica states, "From the 1920s onward, Eliot’s influence as a poet and as a critic—in both Great Britain and the United States—was immense, not least among those establishing the study of English literature as an autonomous academic discipline."

In honor of T.S. Eliot's birthday, we've collected some of our favorite articles on one of the greatest men of letters of the twentieth century.

T.S. Eliot and the Struggle of Faith

Nobel laureate T.S. Eliot made some of the most recognizable and well-respected contributions to the American literary canon. He is best remembered for poems like "The Love Song of J. Alfred Prufrock" (1915) and The Wasteland (1922), and his poetic efforts are often considered synonymous with the “high” modernist style of his time. Though less well known, T.S. Eliot also penned several plays—religious in nature—later in his career. They, too, are deserving of our attention, if for no other reason than for the insight they give us into the ever-searching mind of one of the greatest writers of the 20th century. 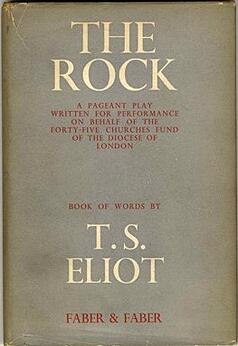 Eliot was nothing if not a seeker: seeking to reconcile the culture he saw with what he hoped it to be; seeking to reconcile an inner despair with a parallel want of faith. Thus, that Eliot went from writing poems like The Wasteland to religious plays like The Rock is an interesting trajectory. Though, after some reflection, it seems to make sense. Read more >>

T.S. Eliot: Nobel Laureate and Voice of the Lost Generation

Thomas Stearns Eliot was born in St. Louis, Missouri in 1888.  A Nobel laureate, The New York Times described his writing as giving "new meaning to English-language poetry,” Due to a congenital double hernia, T. S. Eliot spent much of his childhood reading rather than running around with other children. His family eventually moved to New England where he attended Harvard. At age 22, he moved to Paris; four years later, he married Vivienne Haigh-Wood.  He later claimed, “To her, the marriage brought no happiness. To me, it brought the state of mind out of which came The Waste Land."

Although this is a disheartening statement to make about one’s marriage, it is difficult to mourn the writing of The Waste Land. This poem, heavily edited by lifelong friend Ezra Pound, defies classification. It jumps in and out of narrative voices, referencing everything from Wagner to the Psalms to Shakespeare to tarot cards in a disjointed but fluid series of images. Writing occasionally in German, occasionally in Greek, Eliot managed to embed a Shakespearian Sonnet in an otherwise largely un-rhyming poem. It is brilliant and very bleak. Read more >>

To call T.S. Eliot the most important English-language poet of the 20th century doesn’t feel like too much of a stretch. His 1948 Nobel Prize is just one indicator of the lasting impact that poems like ‘The Waste Land’ (1922) and ‘The Love Song of J. Alfred Prufrock’ (1915) have to this day, and will no doubt continue to have as long as there are English professors and recreational readers of poetry in the world. In spite, or perhaps because, of the influence of Eliot’s poetry on the Anglophone poetic landscape, the man himself has remained something of an enigma since his death in 1965. Here are five things you may not know about T.S. Eliot.

1. His straight-laced demeanor was a sham

The popular image of T.S. Eliot has, for many years, been of an extremely formal and straight-laced figure (befitting his official occupation as a banker throughout much of his poetic career). To wit, Virginia Woolf, in a letter to her brother-in-law, once wrote, “Come to lunch. Eliot will be there in a four-piece suit.” Aldous Huxley referred to him as “the most bank-clerky of all bank clerks”. This air of formality, however, may have just been for show. During his time working at Faber & Faber, Eliot was known to prank board meetings and visiting writers with a wide array of props, from whoopee cushions and exploding cigars to firecrackers. Once in London, he and his nephew purchased stink bombs from a local joke shop and set them off inside of a hotel lobby. Read more >> 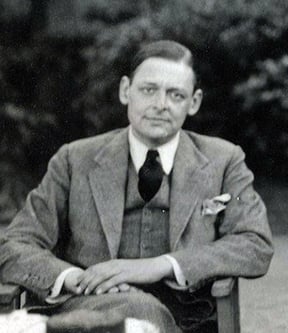 Born in St. Louis, Nobel Prize winner T.S. Eliot remains one of America’s most treasured literary exports. The poet who famously authored “The Waste Land” (1922), “Four Quartets” (1943), and “The Love Song of J. Alfred Prufrock” (1915) also tried to revive the verse-drama genre (most notably with 1934's The Rock) and was an astute literary critic, giving advice to young writers who hoped to carry on the poetic traditions that Eliot himself reshaped. Though his social reputation was one of stuffiness and formality (Virginia Woolf liked to refer to Eliot as wearing a “four piece suit” to dinner), he was actually an avid prankster, once setting off stink bombs in the lobby of a posh hotel—and this playful sensibility is alive in works that can often seem obscure and forbidding. This is not to say that his work, often inspired by his Anglican faith, doesn’t have an imposing moral seriousness to it. Perhaps Robert Frost said it best: “We are both poets and we both like to play. That's the similarity. The difference is this: I like to play euchre. He likes to play Eucharist.” Here are some of Eliot’s most memorable quotes.

1. “Immature poets imitate; mature poets steal; bad poets deface what they take, and good poets make it into something better, or at least something different.” Read more >>